My week walking The Way of St. James: days 3 and 4 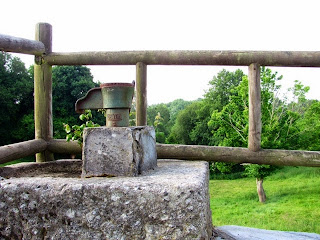 Wednesday, June 11th was one of the longest days of my life, as well as our longest walk on the Camino. We left Palas de Rei quite early and headed off into the morning fog. My dad and I went about 30 kilometers along highways, through little towns, and in the woods. We were passed by many bikers with their packs strapped to the sides of their bikes, as well as a group of merry men from the Basque Country who were singing their way along the Camino. 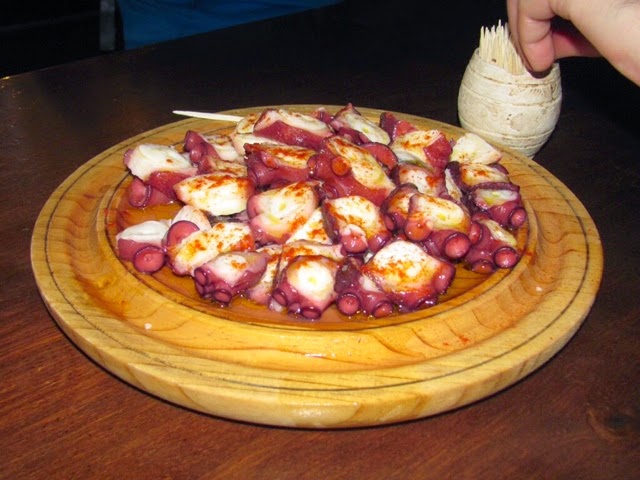 It got hotter and hotter throughout the day, so my dad and I were so ready to stop and rest in the busy town of Melide. We ate pulpo, octopus, at a local pulperia and got to stamp our Camino passports with the restaurant's stamp, which also had an octopus on it. I split a spanish tortilla with my dad as well, then we applied more sunscreen and continued on our way. 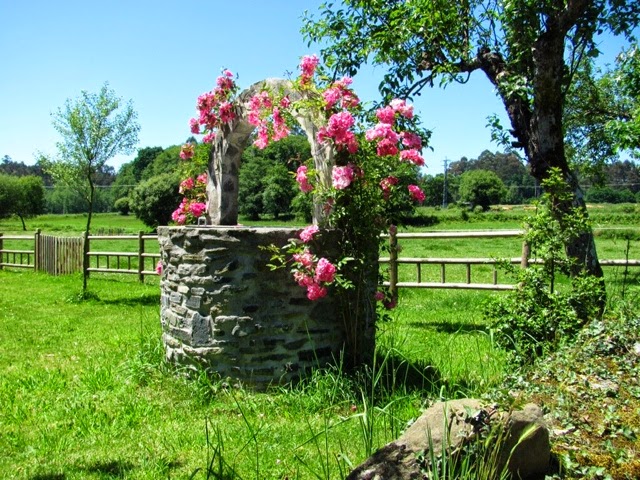 Although today was the longest day, it was also a really great day because of all the fantastic people that we got to meet. I never thought that a nine year old Australian girl in a lemur costume, jamming out to Katy Perry's song, 'Roar,' would be my hero, but I found that out soon after I found her chugging along, alone behind us. We began chatting and she told me the story of how she got there and that her older brother (11 years old) had completed the entire Camino about two years before with their father. She also told us that her mother and brother were "way back behind us" and that they were on day 40-something of their pilgrimage and they were walking to honor their father who had unfortunately passed away in September. I did not catch that girl's name, but she was doing so well and had such a great attitude. She really inspired me through the things she told us and we could tell that this trip on The Way really meant a lot to her. She was not bitter, and she was so open to befriend us. Her mother and brother and her were all going to continue traveling around the world for as long as they could and the children were being homeschooled by their mother. Honestly, what could be a better education than traveling around the world at a young age?
I also met a fellow Sherlock fan and writer while walking through the woods. We talked for a while and shared some of our Camino experiences, which really made the time go by quickly. Shout out to Ella! 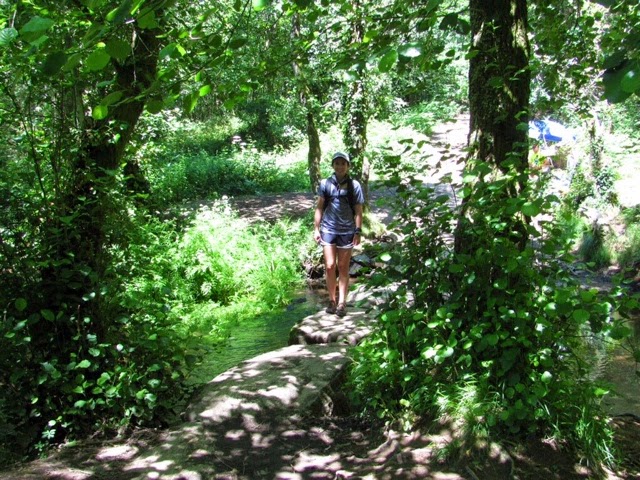 A little while later, we were walking through some deep woods with lots of shade, which we were thankful for. We crossed this lovely stone bridge (above) (Literally, stones... like huge stones) and found a saucy Spaniard sitting next to a table full of t-shirts and souvenirs. He offered us "special stamps," so we waited while he melted red wax over our Compostela passports and stamped them with a seal with two feet on it, which was a nice touch. I noticed that he had a prosthetic leg, and while we were waiting for the wax to dry, a group of bikers were trying to cross the stone bridge and the guy in front was having a hard time maneuvering along the narrow bridge while rolling his bike. My dad remarked on how heavy the bikes looked with all the bikers' gear on them, and the Spaniard shook his head. He called to the guy in Spanish and told him to just carry the bike, but the biker said that it weighed like 300 kilos... Then the Spaniard sassed him and told him that his bike weighs double that amount and that he only has one leg. The whole conversation was something great to witness... and I later found out that the guy sells the shirts to raise money for Paralympic athletes. 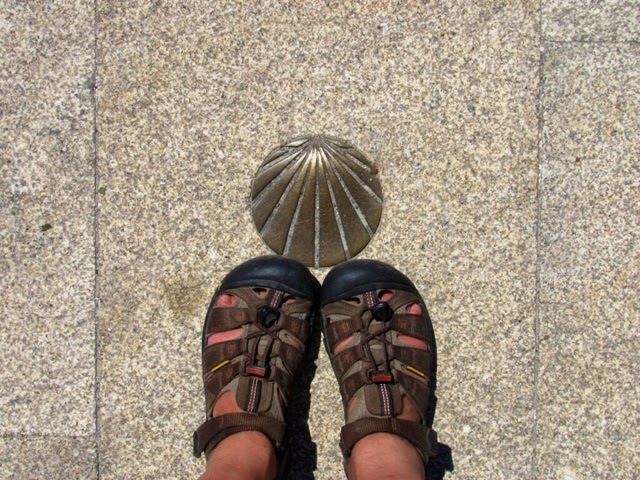 We eventually made it into the town of Arzua, after following the bronze shells to our hotel. The town is known for its cheese, which we got to try in a sandwich. The town was adorable and I would have liked to do more exploring, but the heat really took a lot out of us. 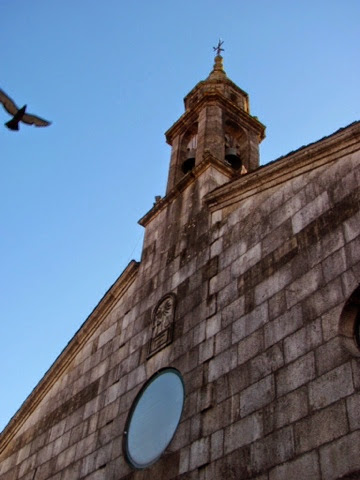 Thursday, June 12th: Arzua to Pedrouzo
The photo above is from the church in Arzua. We visited in the early morning and got a lovely stamp for our passports. 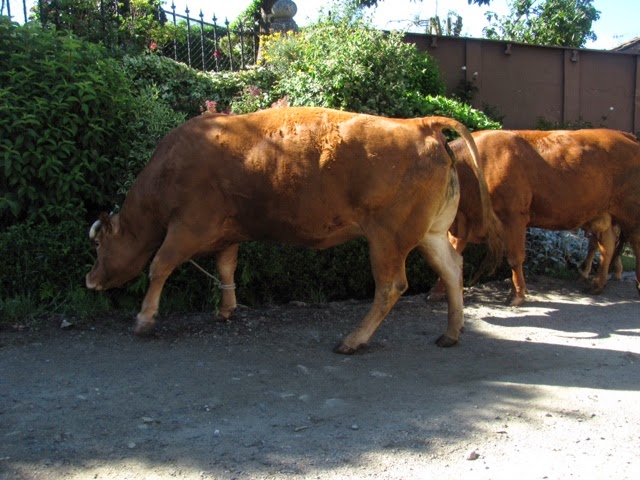 We saw plenty of cows and farms along the day's walk. The little towns that we passed through seemed not to have been touched by the passing of time. Every house is made of stone and wood, and the roofs have ceramic tiles. The people who live there are small and tan. Even if we were the 118th pilgrim that they have seen throughout the day, they still greeted us with a smile and a "buen Camino." 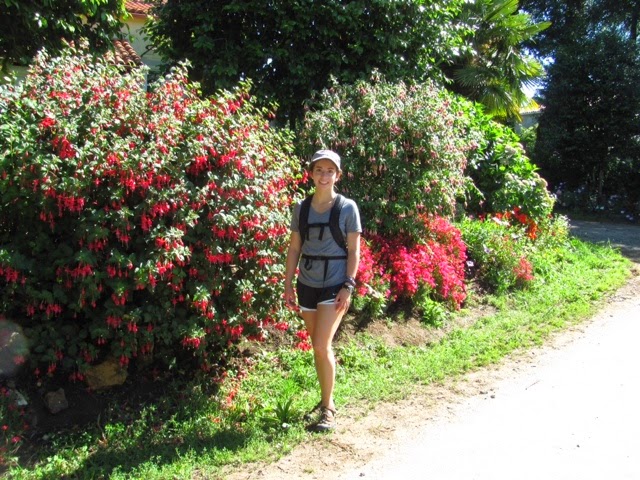 This day was very hot, but filled with beauty. We met some really nice people and saw lovely gardens and wildflowers. We got a little lost while looking for a place to rest and eat, but we were eventually on our way again, heading towards Pedrouzo. After passing through a forest of eucalyptus trees, we got to the town. 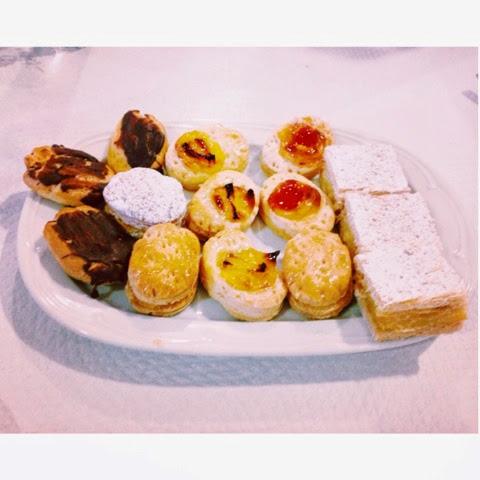 After celebrating mass at the local church, we met up with some great friends that we had met on the Camino on Tuesday. We had dinner and some great dessert with them and talked of meeting up again in the future, either in the US or in Spain.