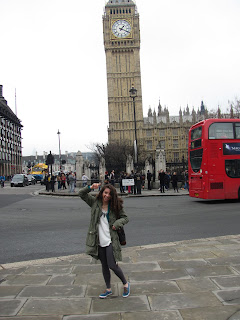 Even though I have been home for three weeks and have been asked the question: “How was London?” at least forty times, I have still not been able to come up with a better initial answer than: “It was great. It was so great.” Of course, afterwards, I elaborate on the incredible places that I have been to and everything that I have seen while overseas. However, I have found that it is so difficult for me to describe my entire experience in few words. I could say “It was one of the best experiences of my life,” but that would be cliché. True, but cliché.
Being able to study abroad was definitely one of the most amazing opportunities that I have been given, and I am so glad that I was able to go to London. Initially, when my best friend Emily Davis and I both found out that we had been accepted into the program, we had plans to be gone every weekend. We wanted to visit Italy, Portugal, Spain, Morocco, Greece and anywhere else we could possibly think of. We quickly found that we did not have the funds or time to do this. Luckily, we were able to go to France, Ireland, Scotland and the Czech Republic, as well as several places in England and we used our other weekends to explore our city and get to know it as well as we could in three months. I have now become an expert on the city of London and I would not have it any other way.
Three months may sound like ample time to be able to see everything there is to see in a city, but London is just so full of interesting sights and events that it would be near impossible to see everything. There was always something exciting happening, whether it was Tom Cruise filming a scene from his next movie down the street from our flat, or a giant pillow fight happening in Trafalgar Square. There was such a variety of areas and places to go in the city, each with its own kind of charm. Personally, I fell in love with Brick Lane and the different marketplaces. Also, most of the museums were free and there were plenty of places to do some people watching, which is one of my favorite pastimes. It was impossible to be bored in London, which is why I loved it so much.
To my parents’ relief, there was some studying done while I was in London; It was not just a three month vacation in Europe. Taking classes about London, while in London was quite the experience. There were times where we would be reading a work of English literature and come across the name of a street that we had walked down hundreds of times. Also, being able to take a class about William Shakespeare and his works, while living in England was incredible, as well as seeing several of his plays being performed. Through my classes, I was able to gain further knowledge on the history of the place where I was living and they also helped me understand why things are the way they are today.
Studying abroad in London has taught me to be ultra- independent. It has also prepared me for living on my own, having multiple responsibilities, including cooking for myself, and it has let me experience city- living. I have found out just how much I love the city sounds, close buildings and how much culture there is. I encourage anyone with an inclining for adventure to study abroad. Being outside of my comfort zone really pushed me to branch out and do some exploring. I also learned a lot about myself while on this trip. It was a great experience and I would do it again in a heartbeat.
Posted by Angela Maria at 8:15 PM No comments:

The view from the London Eye 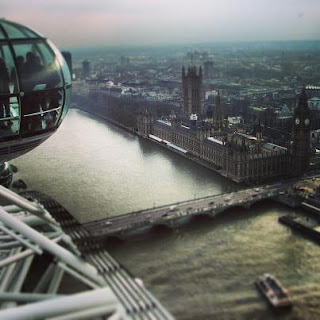 Earlier this week I went on the London Eye with a few of my friends. I had been hoping to go on a nice day and luckily, it was sunny and clear out, though still very chilly. 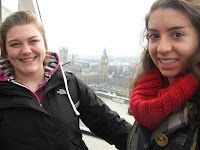 The best part about going on the Eye is the view... we could see for miles! It was amazing to be able to see Big Ben and Parliament, the Shard, St. Paul's Cathedral and Buckingham Palace from standing in the same spot and turning. 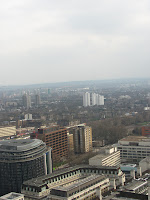 The ride lasted about a half hour and we were in the pod with about fifteen other people. I would highly recommend going for a ride on the Eye to anybody who is traveling to London. If I have time in the next two weeks, I hope to go on it at night to get a different perspective of the city. 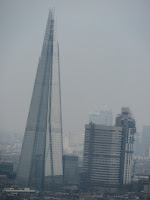 Posted by Angela Maria at 7:51 AM No comments: