Tips for walking the Way of St. James 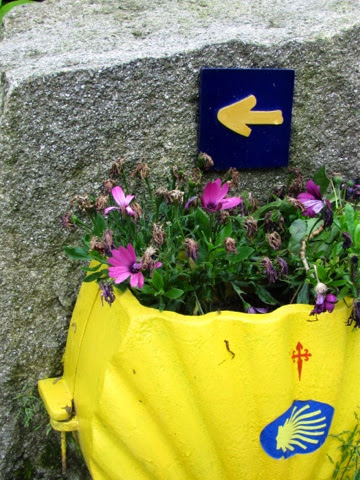 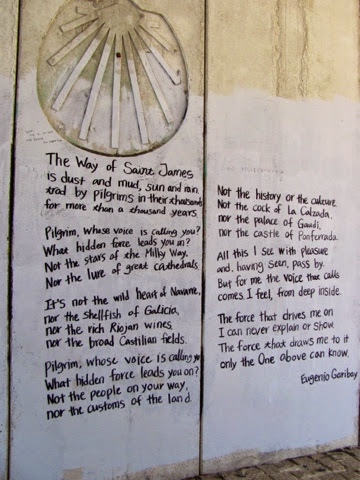 Posted by Angela Maria at 3:31 PM No comments:

Places to relax in Madrid 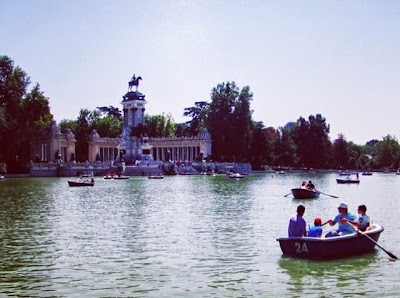 Parque del Buen Retiro:
Retiro Park is the most well-known park in all of Madrid, and it offers fountains, shade, and even a man-made lake to row boats on. 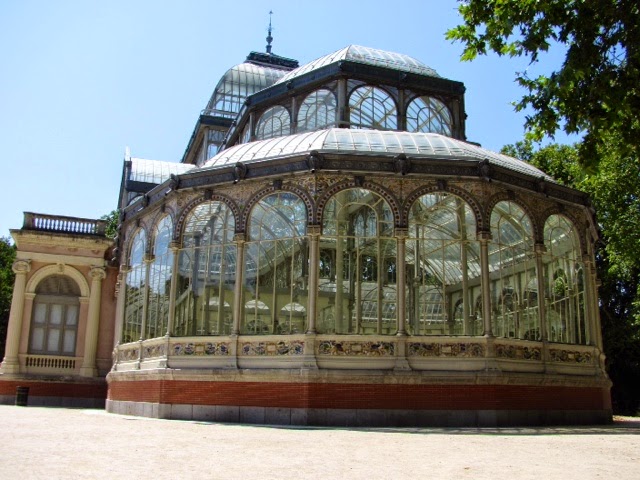 Above is the Crystal Palace, which is located inside the park and is free to enter. I did not go in, because I heard that it gets brutally hot in there on summer days, but it looked like an interesting place to visit. 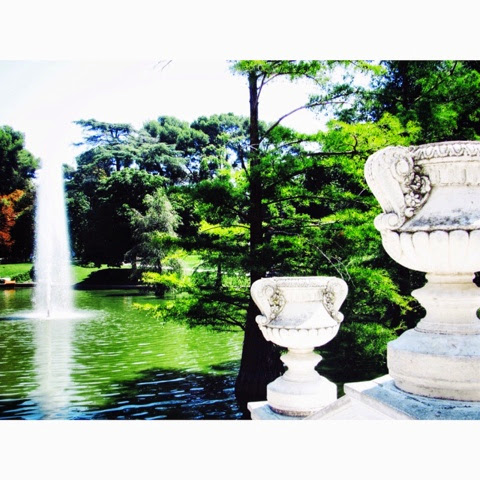 You can see a surprising amount of wildlife in the middle of Madrid... In just a short time in the park, I saw more turtles in one pond than I have ever seen before, ducks, fish, and frogs... also, all sorts of dogs. It was like a mini safari or something. 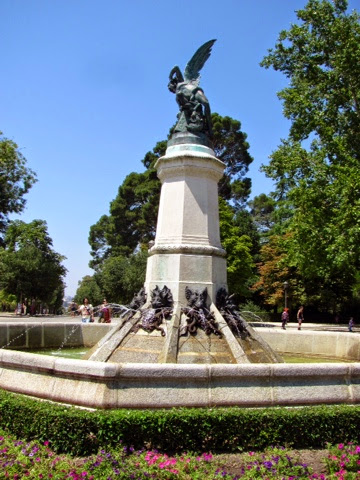 In the middle of the park, there is a statue of a fallen angel; presumably Lucifer... Now, some people find it disrespectful to keep a statue of Lucifer in a public park in a very Catholic country, but I do not really think it is meant to be taken as devil worship. 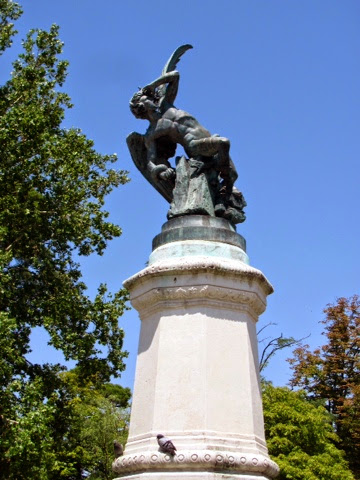 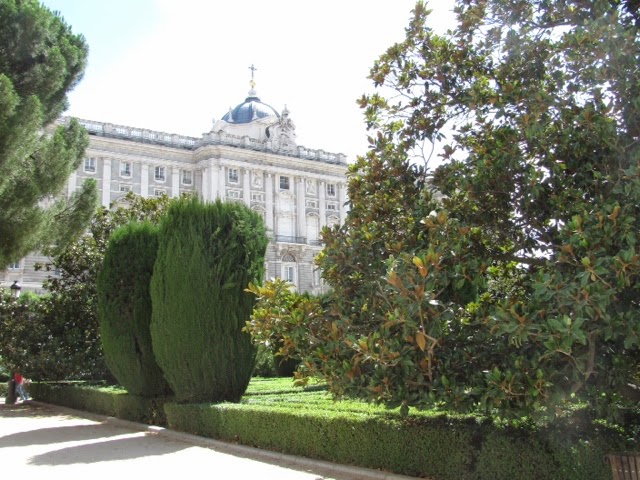 After visiting the Palace on a nice hot Saturday afternoon, my friend and I decided to venture to the Palace Gardens, which are open to the public. The manicured hedges and trees offered us the shade that we so desperately needed in order to hide from the sun, and it also provided cover for canoodling Spanish lovers...Beware. 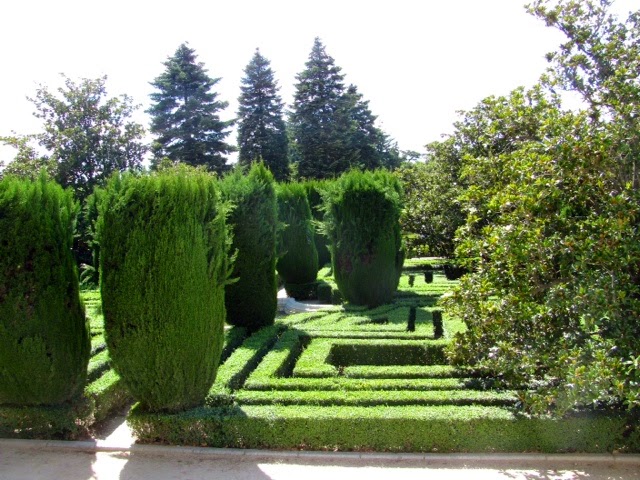 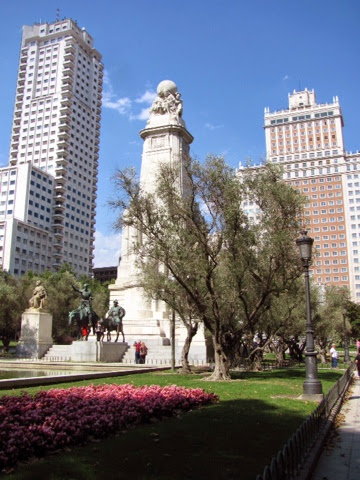 Although not my favorite spot to sit and rest, Plaza de España is a nice place to pass through. There are places for photo ops, as well as nice shady spots to walk through. 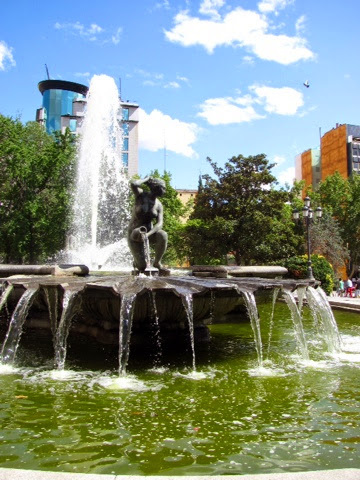 I often passed through the plaza on my way to the main shopping street, Gran Via. My friends and I also found a little market that was set up in the plaza on a Thursday afternoon, which sold handmade goods and clothing. I bought a pair of "Jasmine" pants, which look a lot like the pants that Jasmine wears in Disney's movie, Aladdin. 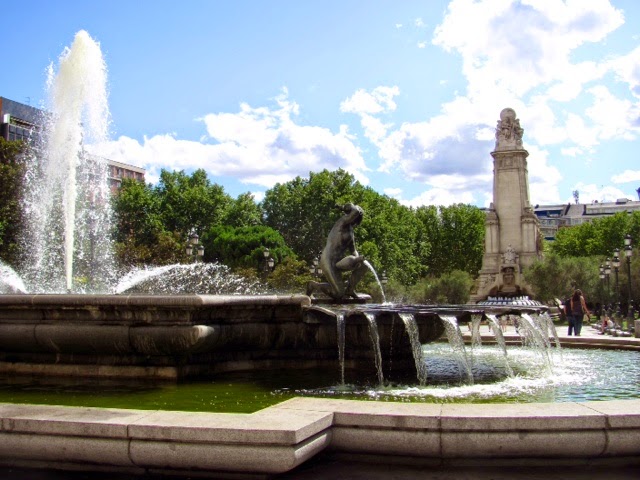 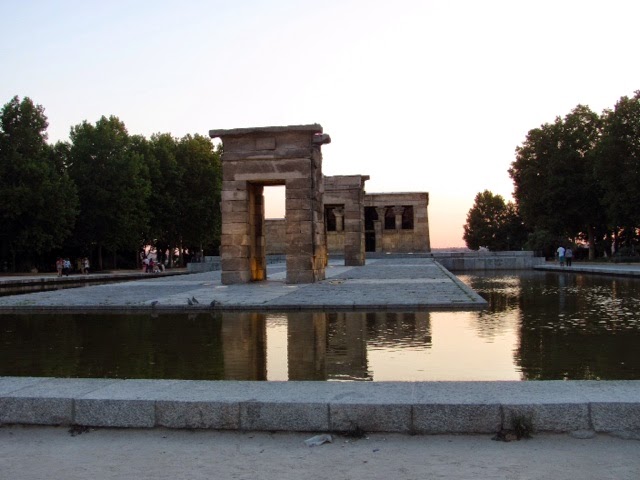 This group of photos is from one of the nights where my friends and I went to Templo de Debod to watch the sunset, along with half of Madrid. Apparently, this is a very popular place to hang out after dark, and people bring picnic blankets and romantic bottles of wine. 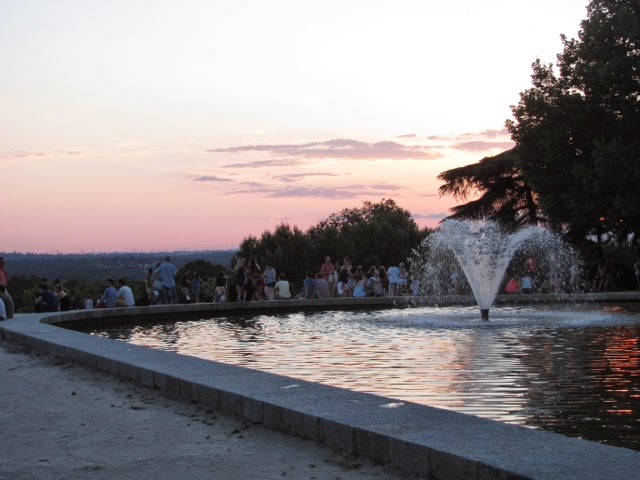 It gave us a beautiful view of a city as well as a stunning sunset. During the daytime, Parque del Oeste is a massive patch of land with lots of paths for running, a rose garden, and a cable car that can bring you all the way to the other side of the park, on the outskirts of Madrid (I covered this in a previous post). 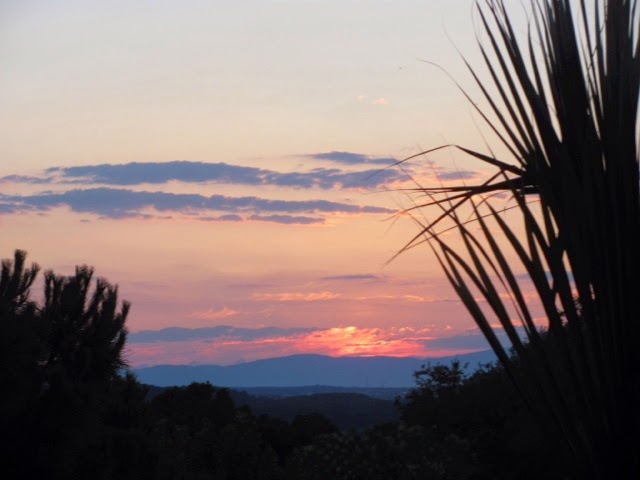 Posted by Angela Maria at 9:27 PM No comments:

My favorite Museums of Madrid 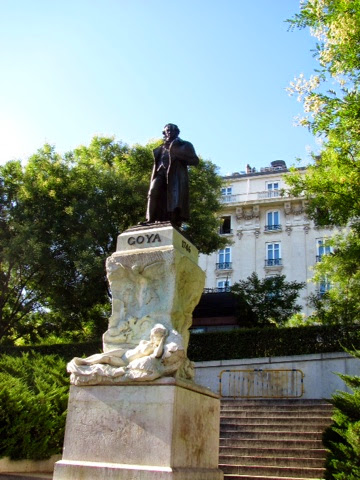 I am now back from my two-month-long adventure in Spain, and have realized just how behind I am on my posts. I had a great time, and learned a whole lot about the culture and the city of Madrid, as well as about myself. Much of my time was spent in class or hiding from the heat, but I also found a good amount of time to be a Madrileña and a regular tourist. I visited many of the city's museums, so here is a quick guide and synopsis of what I found there:
Museo Nacional del Prado
Being one of the world's most famous museums, the Prado is a must see even for the quickest of visits to Madrid. Since I had a whole month in Madrid, I did not need to rush to see the entire museum in one day; instead, I went a total of four times. During regular hours, the entry fee for the museum is €14, but each day from 6 pm to 8 pm, entry is free. This is no secret, so it is best to get to the museum around 5:30 pm, and just wait in the line for a half hour. It is very likely that you will be standing in the shade, so there is nothing to really worry about. 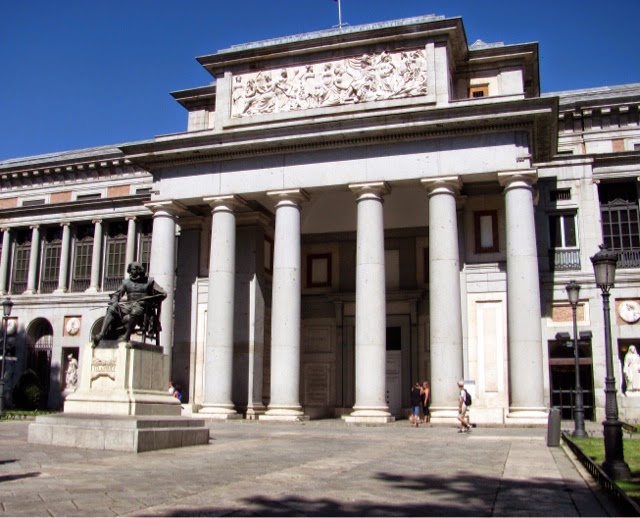 The Museum holds some of the most famous works of art, including sculptures and works by Spanish painters such as Velazquez, Goya, and Ribera. There are also paintings by Tintoretto, El Bosco, and El Greco. 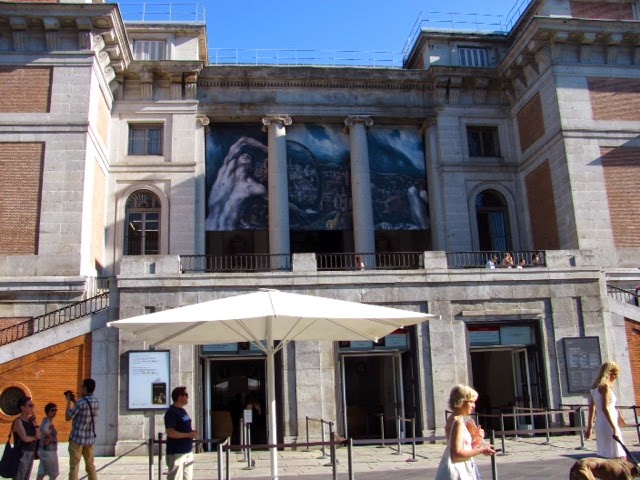 During my final visit to the museum, I was able to see the El Greco exposition titled El Greco and Modern Painting. This exposition included many of El Greco's famous works, as well as others that were inspired by his talent and style. There were paintings and sketches by Picasso, as well as others by Jackson Pollock, Modigliani, and Manet. The beauty of this exposition, which goes until October 5th, was in the comparisons done for each of El Greco's works and the others that were similar to them. Walking around this exposition took me about an hour and fifteen minutes, and I definitely recommend going.
Museo Sorolla 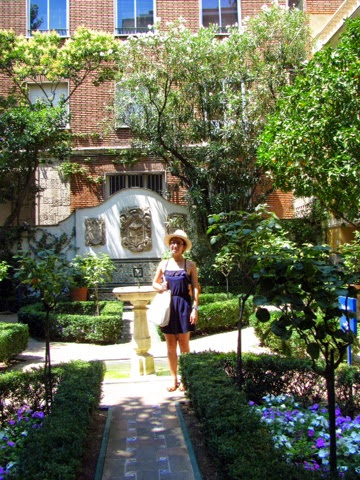 This is one of Madrid's hidden gems. I learned about Joaquin Sorolla while visiting Valencia, where he was from. His works are housed in his residence, and include many of his family vacationing on the Mediterranean. Most of his paintings of the sea include beautiful blues and visible brush strokes. They are incredible to see in person. 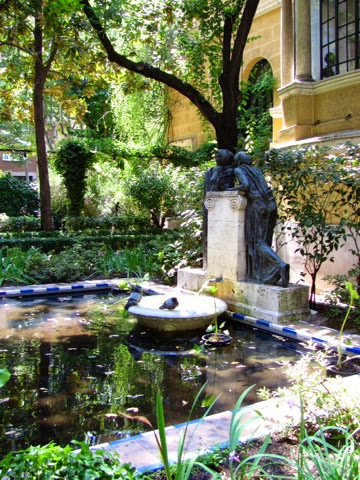 The gardens outside of the house are beautiful, as pictured above, and the inside of the house is decorated with many of his works as well as furniture and items from the period when he was alive. I visited the museum on a Sunday, which meant that I got in for free!
Museo Cerralbo 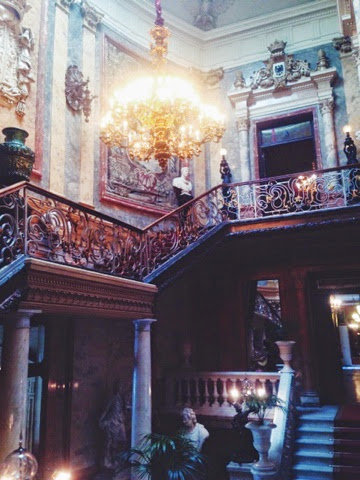 This museum is located very close to Parque del Oeste and Palacio Real. It is also in the former house of the Marquis of Cerralbo, Enrique de Aguilera y Gamboa. He was a collector of famous paintings, artifacts, books, and clocks. The entire museum ticks, and its walls are filled with lesser-known works by artists such as Tintoretto and Van Dyck. 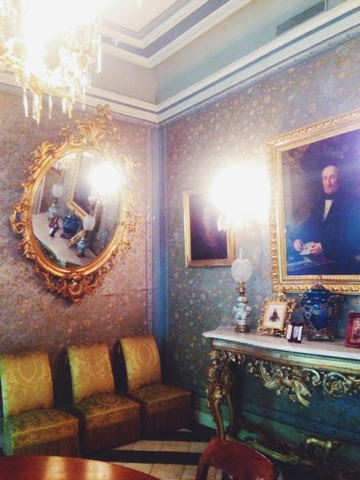 The house has a beautiful ballroom and a surprising amount of rooms to go through. I really enjoyed visiting this museum because it was very different from others that I had been to. 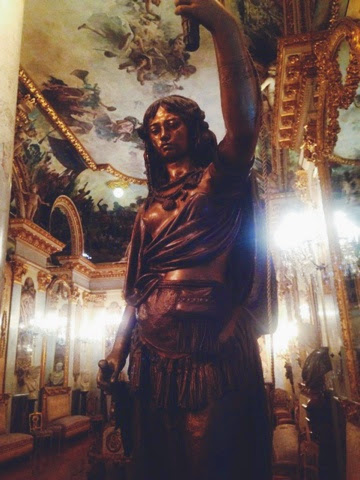 I was also able to visit Museo Nacional Centro de Arte Reina Sofia, which holds Modern and Contemporary art by artists such as Salvador Dali, Pablo Picasso, and Joan Miro as well as the Museo de arte Thyssen-Bornemisza with all different kinds of art. It is smaller and more intimate than the Prado or the Reina Sofia, which is a nice change.
Every one of these museums are fantastic and worth visiting if you ever visit Madrid.
Posted by Angela Maria at 3:42 PM No comments: