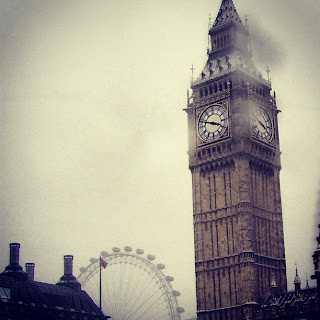 Wow these past few days have gone by in a blur. I'm so glad that I get to live here for three entire months and take in as much of the city as I can. I've noticed so many similarities and differences between the United States and London already. It has been so amazing to just be in this big city which is at the center of so many things.
Some of the most amazing things are in this city and my school group and I got to see them from a tour bus yesterday. It was very snowy and cold, so it was great to see them from the window and now we are even more excited to see them up close. We drove past amazing museums, Big Ben, the London Eye, Buckingham Palace and St. Paul's Cathedral. I just am taken aback by how old and mighty the buildings here look. I try not to look too much like a visitor, but sometimes I cannot help but look up in awe.
I have noticed how nicely ladies that are my age dress here. They look so unique and bold and amazing. I wish I could dress like them. I have seen a lot of fur; on hats, coats and boots. I want to look for a nice fur hat to keep my ears warm. They also wear a lot of outer clothes that are nice looking, rather than sporty. My northface really stands out among their pea-coats and army jackets. I have also seen a lot of combat boots and Dr. Martens, which made me wish that I had packed mine. I rarely wear them in the US. I love London style! It is all so different but in the same tone. 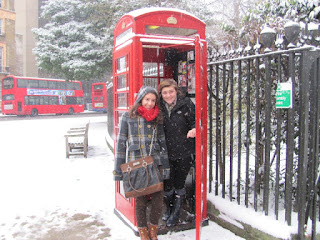 Posted by Angela Maria at 3:46 PM No comments: 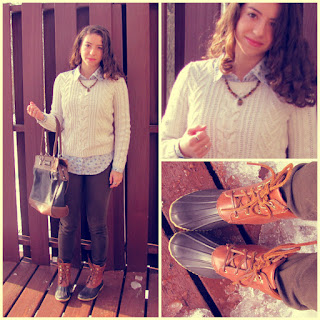 I cannot believe that I leave the US in a little under a week. It is insane how quickly this break has gone by. I have gotten a lot done... though I am still behind on packing. I do have an idea of what I will bring though!
I have plenty of sweaters for the damp, London weather... I also have good boots for walking the city streets. I am so excited to be living in the big city! I have always been intrigued by New York City... I almost went to college there. I am sure life will be much different in the city from how it is in my middle- of - nowhere college in Maryland and my hometown in upstate New York. I am going to take in every minute of it.
I wonder if these boots are acceptable in England... I'm really not sure. Maybe people will give me silly looks... but I don't care. They are my most favorite pair of boots at the moment. They make me feel invincible: I can walk through tall grass or water and they are so silent. They are great for prowlin'.
Posted by Angela Maria at 4:40 PM No comments: 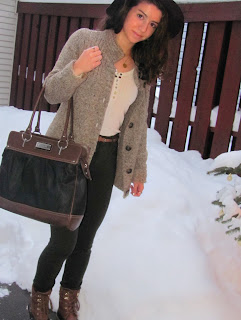 I've been quite busy lately with packing up my entire room and bringing all my stuff home and the holidays. I have also been preparing for my study abroad trip to London. I am getting so excited but I am also incredibly nervous! I have been to Europe before so at least I have some experience... but I will be living in London for three entire months! I have no idea how to pack for this... I will be bringing the Chaps bag that I have in the photo above, as well as a backpack, a carry on and one big suitcase. That sounds like so much... but I am staring at my suitcase right now and it is already looking too small to fit all the shoes that I had hoped to bring.... oh boy.
So far, I know that I will be bringing my Wellington boots as well as the "amphibious boots" that I am wearing in the photo above. I also need to bring a pair of heels and a nice blazer for the internship that I will be doing.
An idea that I had (that I thought was just brilliant before, though now it seems like common sense) was to bring some plain- ish shirts and some bold, bright necklaces... that will make a ton of different outfits...
A person who is in charge of the program suggested that we bring two sweaters...........two? TWO?? That would be like two and a half outfits.... I will sacrifice some shoe space for some more sweaters. That advice was just ridiculous so I took it... and I threw it out the window.
One question that has come to mind has been: do I bother to bring a swim suit?
And the answer is... yes... because we shall be traveling around England as well as to Scotland and the Czech Republic and hopefully to other places which may have hotels with pools... Also... I would really love to go to Italy or Greece but I am not quite sure if we will be able to get over there.
I will post a final count of what I will pack and hopefully I will become more dedicated to updating this blog in the near future...

Posted by Angela Maria at 6:16 PM No comments: