Going 24 hours without my cell phone may be inconvenient at times, but it will also help me increase my productivity and focus during my time without it. 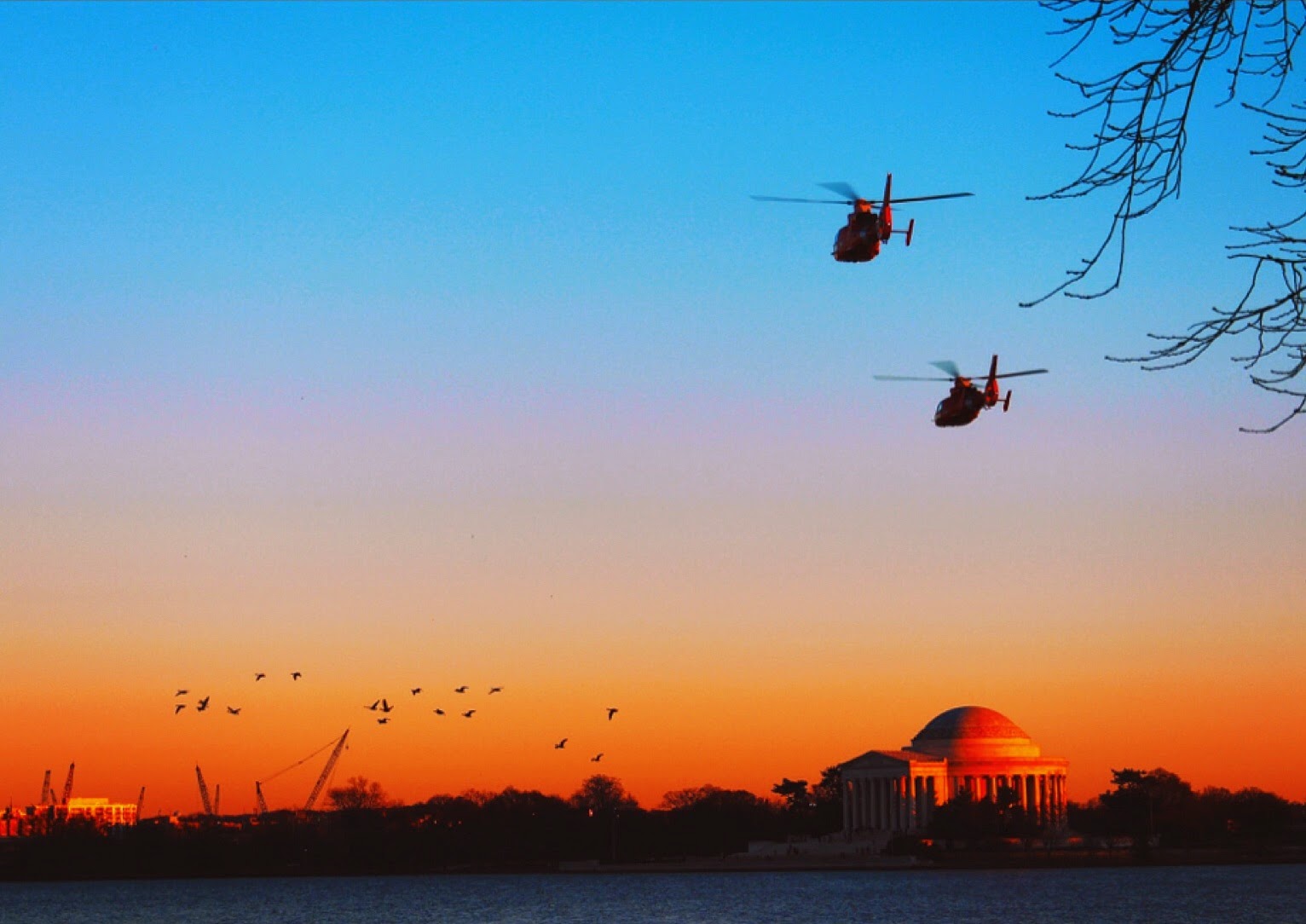 A bit of background:

This experiment is a challenge for one of my classes. Each student in the class must go 24 hours without using his or her cellphone, and then blog about the experience for our social media class. I decided to choose a Friday to go without my iPhone, instead of a weekend day, since I have some events to cover for my internship over the weekend and I will be needing to use my phone for taking photos and putting up social media posts.

Luckily, my Fridays are basically planned by the hour since I have most of my classes and work hours on these days. I was both excited and nervous to see how this experiment would turn out for me, since although I have gone without my phone before while on trips and retreats, I have never gone a normal day  full of classes and work without it.

Here is what I noticed during my time sans-iPhone:

Pros:
I did not look at a screen before bed, which I have read is recommended in order to get a better night's sleep and feel more rested.
I also fell asleep faster since I wasn't checking any social media accounts before bed.
Without my phone, I was able to focus more on the tasks that I had to get done. There were absolutely no reasons for distraction, so I got my work done faster and all in one sitting.
Since I was not looking down at my phone to kill time before class, I noticed just how many people were doing so. It was essentially 80% of the class.
I felt like I was ultra-focused on what was going on around me.
It was really nice not to have to carry my phone around with me... I realized how free I felt without it.

Cons:
I had to find a different alarm for the morning, and I was so nervous that it would let me down and that I would miss class.
My roommate was locked out and she tried to call me, but I did not know until after she was let in to our building.
I had to email my boyfriend just to try and make dinner plans.
I could not take any photos of the gorgeous day I had.
During the day, I had to explain to at least ten people that I did not have a phone.

Conclusion:
Throughout this experiment, I realized that I was more in-tune with the world around me when I was without my phone. My eyes were open to everything around me, and not having my phone allowed me to take it in and reflect more than I would normally, instead of stopping to take a snapchat.

Sometimes, I felt like I was even too in-tune with my surroundings and it made me the slightest bit uncomfortable, especially after having the security blanket of my iPhone every moment of everyday for such a long time.

I also noticed that I had to ultra-plan my day, make sure I had a watch on, and use creative ways to keep in touch. It was a nice challenge that made me realize just how much I use my phone and also how much I depend on it. Taking a step back was both nerve-wracking and enlightening.

When I finally turned my phone back on at the end of the day, I was a bit overwhelmed by the amount of texts and notifications that I had missed. Also, having to carry it around with me was a bit of a pain.

Through this experiment, I learned that a bit of distance is good... perhaps, in the future, I will take the time to leave the house without my phone every once in a while.

Are you up for the challenge? See if you can go the full 24 hours... or just a few hours without your smartphone and let me know how it goes!
Posted by Angela Maria at 2:16 PM No comments:

A few hours in Niagara-on-the-Lake

I recently wrote a blog post on visiting Niagara Falls, both the US and Canadian sides. I mentioned a great place called Niagara-on-the-Lake, which is a cutesy town just about 45 minutes outside of Niagara Falls, Canada. I have great memories from my childhood, of walking along the lakeside and going into the little boutiques in town. 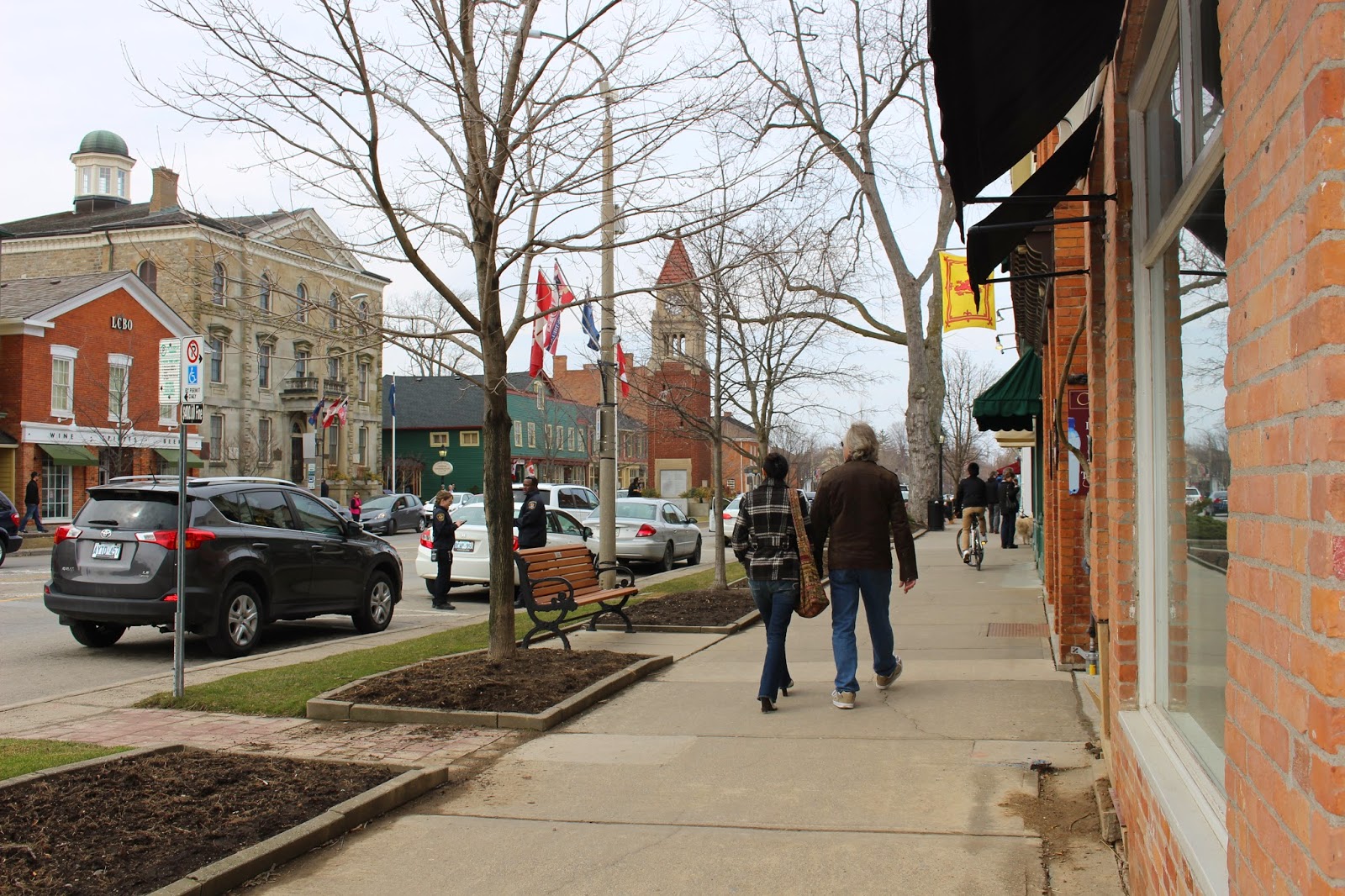 If you are ever in the area, visiting the Falls, I highly suggest stopping by Niagara-on-the-Lake, named so because it is right along the Niagara River. It is surrounded by gorgeous views, farmers markets (when in season), and wineries, and it is a perfect town for a weekend visit. It is also home to the annual Shaw Festival and historic sites such as Fort George.

Here is a run-through of of what I did with just a few hours in town: 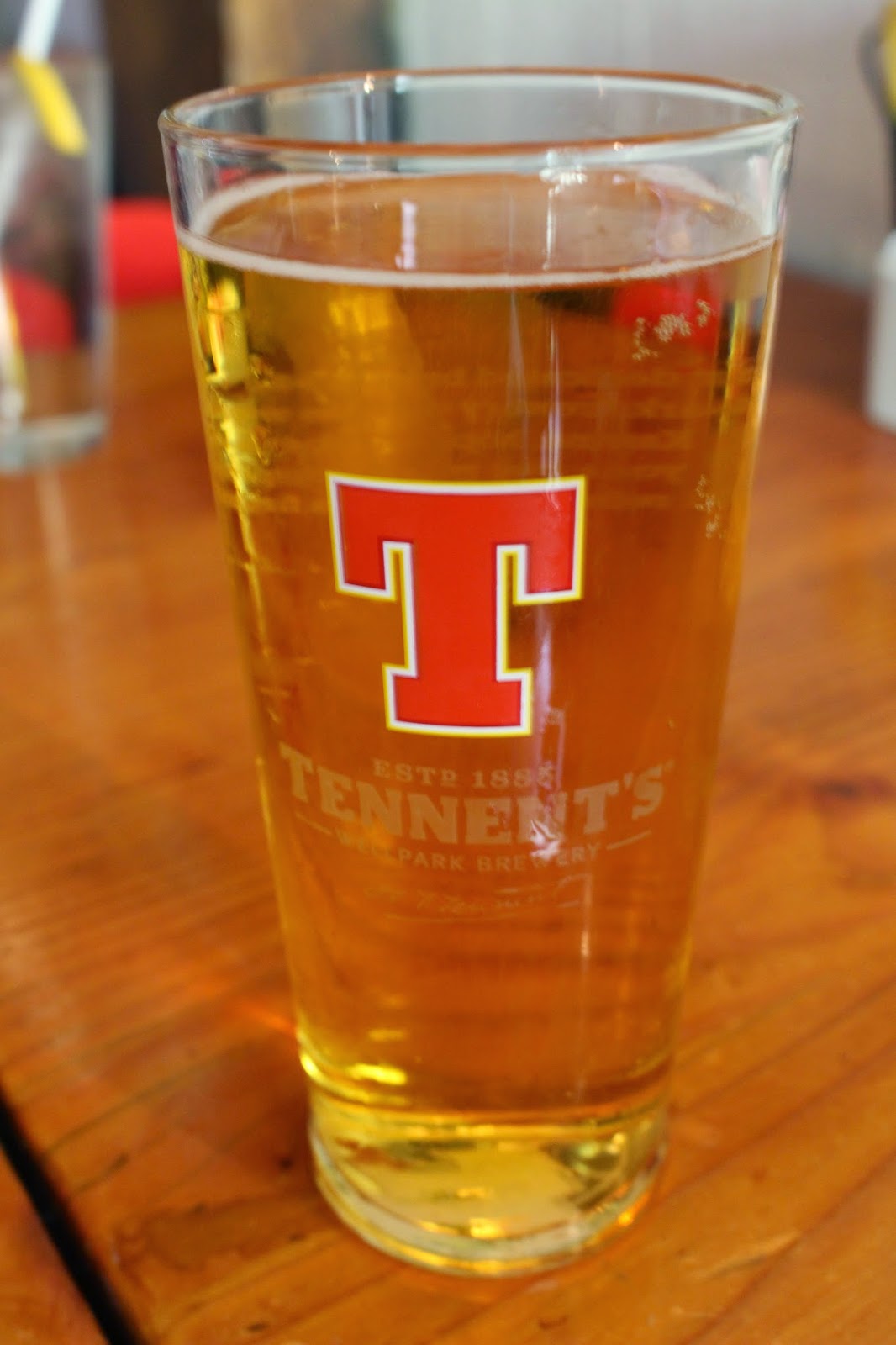 It took us a few hours to drive from my hometown to Niagara-on-the-Lake, so when we got there, we immediately stopped for lunch. We had heard good things about the pub fare at the Olde Angel Inn (and I am also always ready for a little Brit nostalgia), so we stopped and we were not disappointed! I had the traditional British fish and chips with mushy peas, as well as a cider. 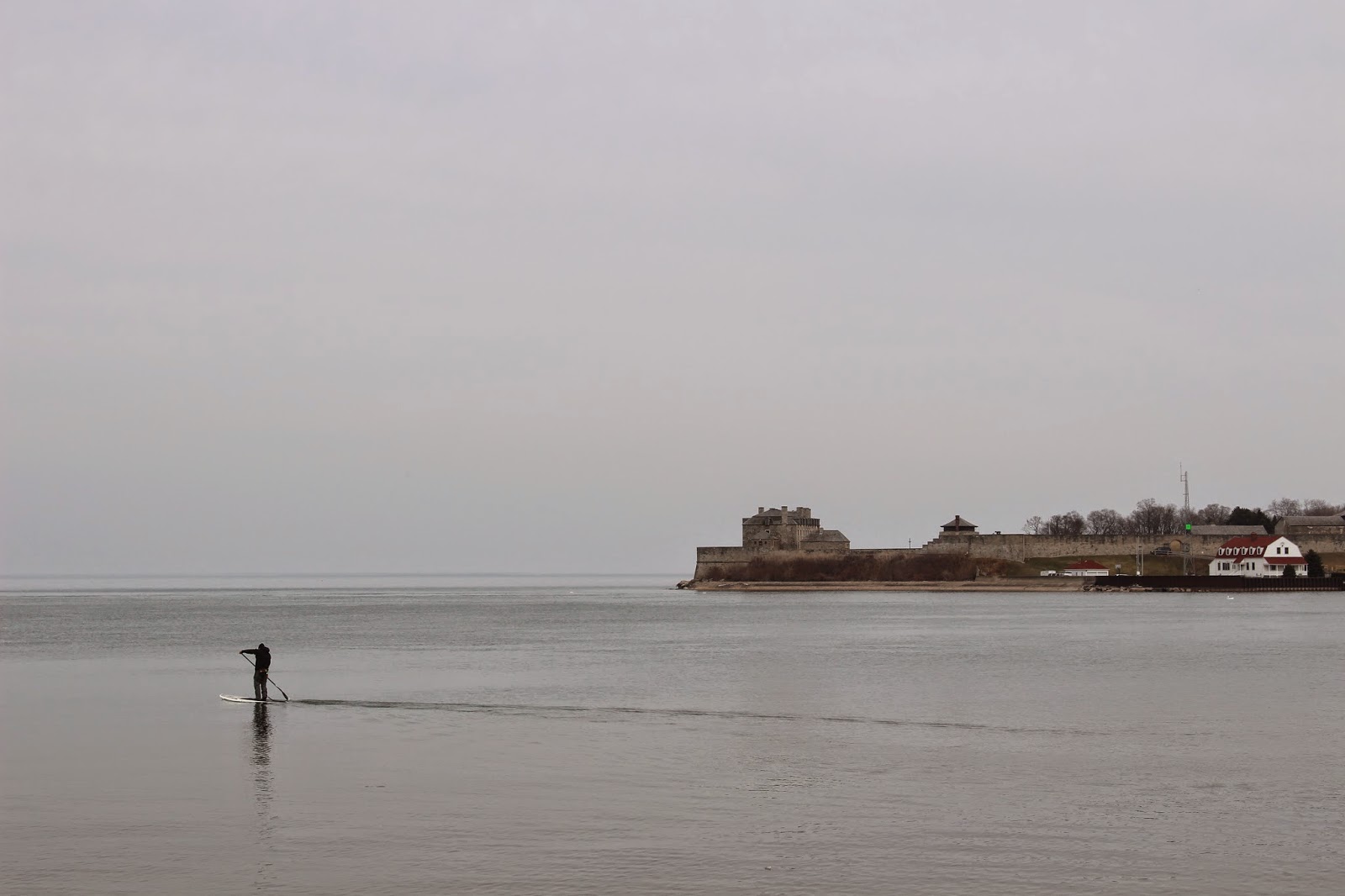 After our proper British meal, we decided to walk around town. It was nearly-frigid (for a spring day, at least) but the adorableness of the town made it alright. When we walked to the shore of the river, we saw someone paddleboarding in the distance... There was still snow and ice along the shore, so we were just praying that he would not fall in! 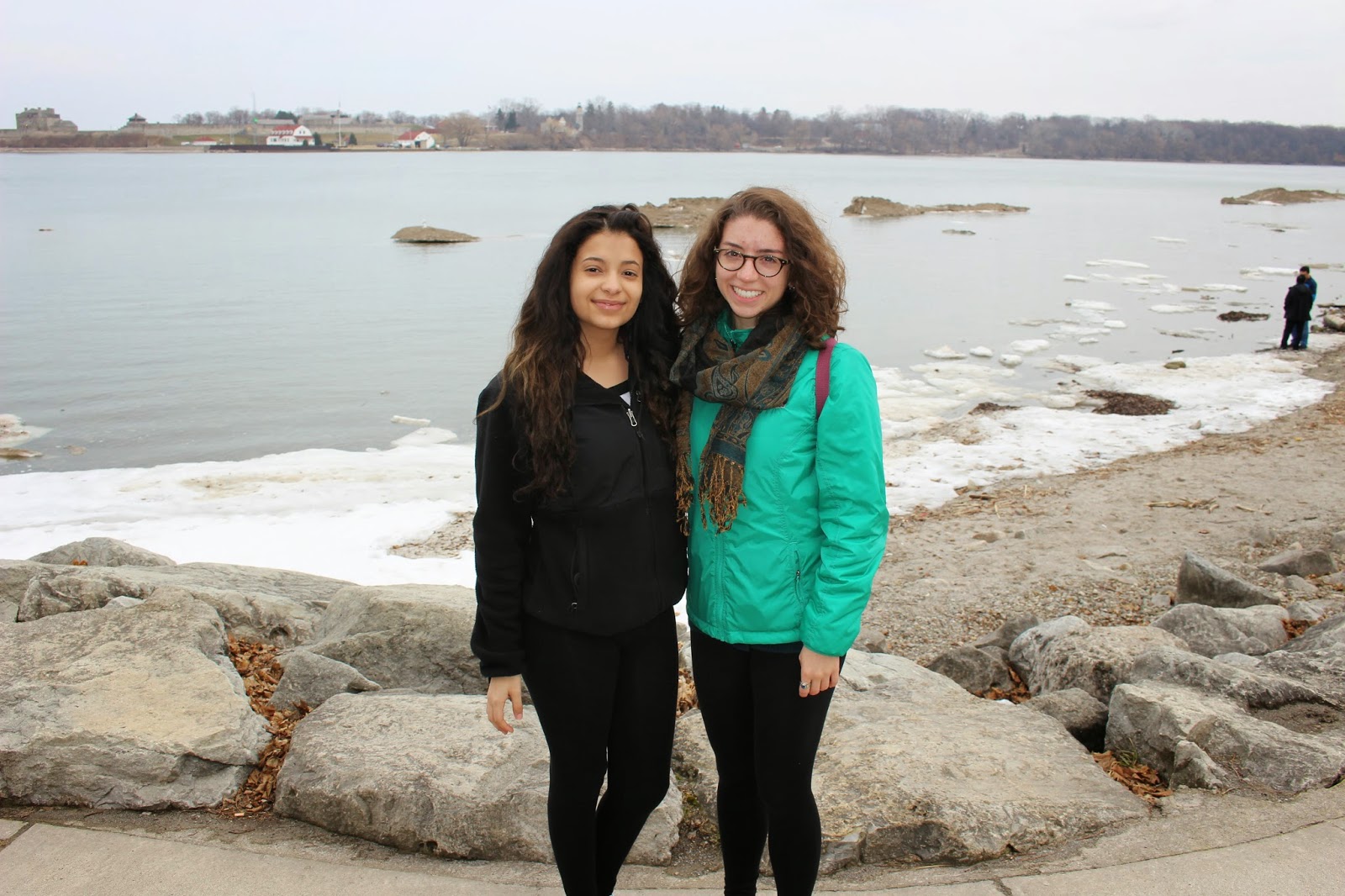 We toured around tea shops, cafes, chocolate shops, boutiques, and Christmas stores and took in the town. We always happen upon something interesting when we visit, and this time we just happened to find several dogs wearing sweaters! It is a great place to visit, whether you have a whole weekend to spend or just a few hours.
For more information on Niagara-On-the-Lake, check out this website.
Do you know of any other cute little towns like this? I am always looking for new places to visit!

Posted by Angela Maria at 9:59 AM No comments:

8 Ways to Stay Positive During Your Job Search 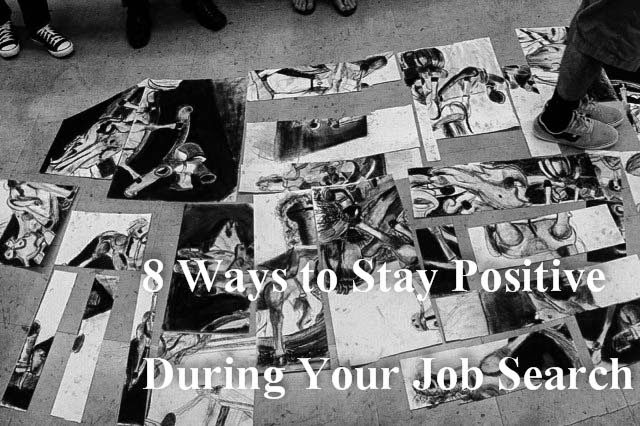 As a senior in the final semester of her undergraduate career, I can honestly say that the process of job searching can be confusing and downright discouraging. I kept on top of my search by being prepared and persistent. However, before I decided on pursuing my MBA after graduation, I had applied to tons of jobs and had heard nothing back, even though I considered myself qualified for them. Although I was losing hope, I tried to stay positive…
Here are just a few of the ways that I kept my confidence up during my job search:
What are some ways that you stay positive during your job search?
Posted by Angela Maria at 2:47 PM No comments:

Humans of the Mount

Getting to Know the Mount Community, One Member at a Time 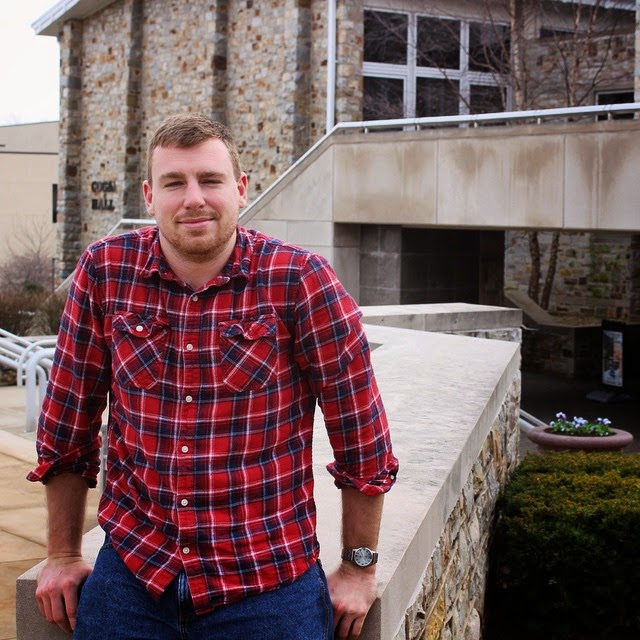 So, I have always been a huge fan of Brandon Stanton's project, Humans of New York, which is a compilation of photos and mini interviews that he has with strangers and passersby in NYC. When I began my internship at my university's Communications Office, I wanted to start a project that I would enjoy doing, would involve the Mount community, and also appeal to prospective students and even people outside of our university.
That's how this initiative came to be! The account, @humansofthemount had already been started by an organization on campus, so I talked to them and they allowed me to take it over, since they were not planning on posting any more, and I was ready to dedicate the time and effort to make it even better.
I have always loved photography, writing, and getting to know people, so I thought I would really enjoy working on this for the semester and that it would go pretty smoothly. 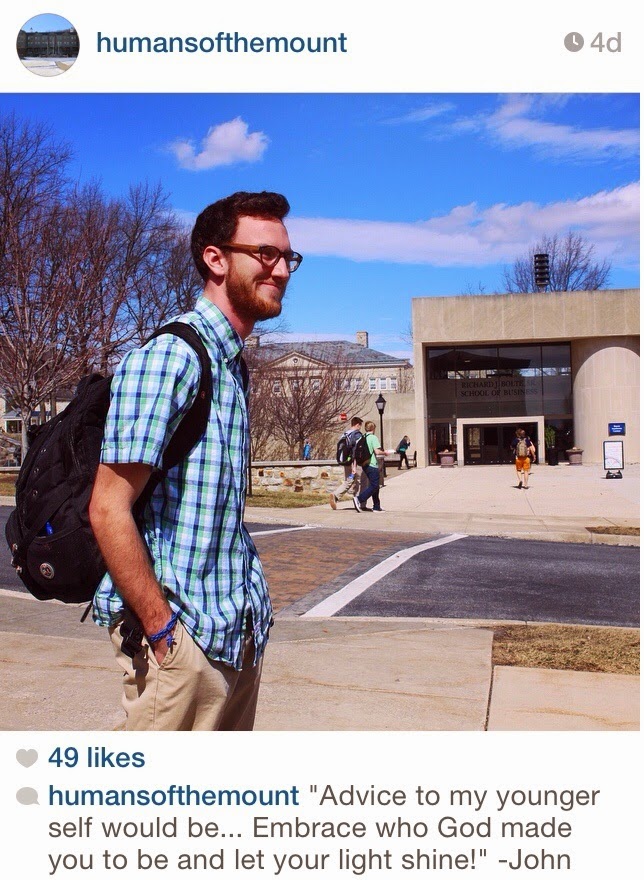 Well, when I first began posting, I found it difficult to approach people with my camera and ask for a photo and a quote for the caption... It just seemed so awkward. Sometimes people wouldn't want to be photographed, or they would be in a hurry to be on their way. It was also difficult for me to find time to walk around campus, just hoping to run into someone to talk to, and then think of a question to ask them, on the spot. Since things weren't running as smoothly as I had wanted them to, I was a little discouraged when I first began the project.
Now I have learned to just go for it and talk to everyone. I have really gotten the hang of it now!  It also helps that the account has gotten more popular on campus lately, so now more and more of the people who I talk to have heard of it, which means that I don't have to explain as much. Some people actually get really excited when I ask if they would like to be featured! 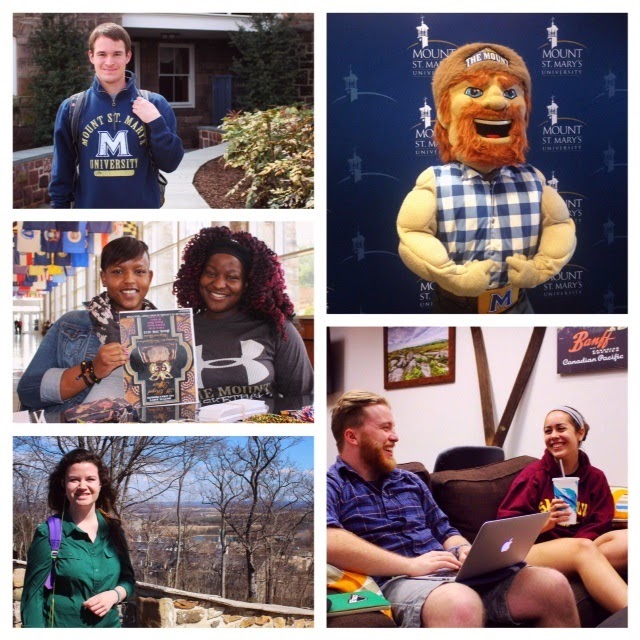 My favorite part of this project has been getting to know people who I probably would not have gotten the opportunity to talk to if I had not been working on this project. I am also really glad that I can share what they have to say with the entire Mount community over social media.
Also, let's face it... I like being able to show off what a gorgeous school I go to and the great people who attend here.
So if you have not already, please check out @humansofthemount on Instagram or Tumblr
Stay tuned for more posts!
Posted by Angela Maria at 11:48 AM No comments: