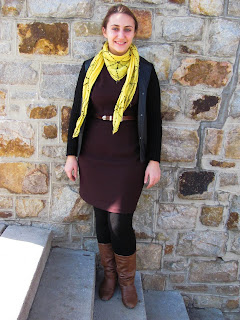 Larisa is a Political Science and French double major and describes her style as artsy and formal. She rarely wears jeans. Dresses and skirts with thick tights are her winter staples. Larisa has been pleased with the chilly weather that we have been experiencing so she can show off her diverse scarf collection. She told me that she owns around thirteen kinds of scarves, which come in different colors and patterns.
“I actually have a scarf organizer in my room” she said.
With colder weather quickly approaching, it is easy to just draw a neutral colored winter jacket around your shoulders and walk out the door. A bright scarf like Larisa’s adds a pop of color to an outfit that would have otherwise been plain. At the beginning of the semester, Larisa had a pop of color that brightened up her outfit each day; her hair was dyed a vibrant purple.
Boots are a staple in the winter. Even before the snow hits, boots can keep feet much warmer and more comfortable than flats or sneakers. Larisa bought her boots in Montreal, when she went on a trip with her Chorale group over last spring break.
“There was about four feet of snow and my suede boots were just not cutting it” she said.
Larisa has been able to use her French skills in many instances, including her trip to Montreal. She also studied in France last summer.
Larisa told me that she gets many pieces of her wardrobe from her aunt, some of which are vintage.
“She knows my style and she actually gave me this dress which is from the 1980s” stated Larisa. Sometimes clothes that are hand- me- downs are real treasures.
Larisa hopes to go to Law school and work in the Human Rights field in the future.
Posted by Angela Maria at 5:40 PM No comments: 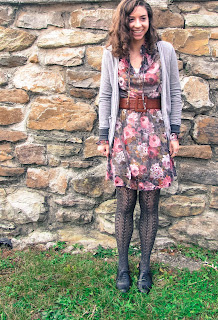 I have not been posting lately because I have been much too busy with school and out of class activities. I am also getting ready to go to London after December Break.
I was really excited to wear this outfit today because dress is from a vintage store. I bought it last year but I have not been able to wear it because I did not have the right kind of slip. I got one as a hand me down from a friend and I could finally wear it! I love it. The sleeves have ruffles that make me feel like I am in another era. I get the same feeling when I wear my oxfords.

Posted by Angela Maria at 9:35 PM No comments: