I recently spent some time in an actual winter wonderland: Niagara Falls, Canada.
Here are a few photos from the day we went. My family and two of my best friends spent the day around the Falls. My two friends are from Maryland, and they had never seen snow or ice like this. We went to the American side as well as the Canadian side. Personally, I like the Canadian side better.

There is a perpetual rainbow at the Falls that we see each time we visit. I was so glad I could capture it with the snowy and icy backgrounds.
The spray of the Falls ices over everything that it touches, so the barriers, trees, and ground were super slippery and shiny. It was beautiful and also dangerous.
Below is a coin-operated binocular on the US side of the Falls, covered in ice. 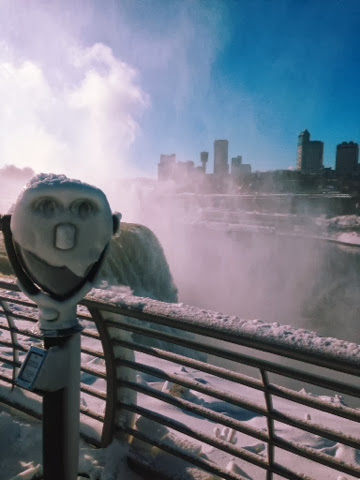 Just a week after this was taken, I found another coin-operated binocular on a beach in Florida.
Quite a contrast! 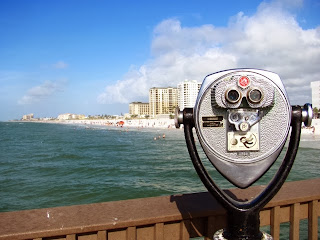 It was so great to be able to spend time at the beach and get a little tan. My family and I had a nice holiday. 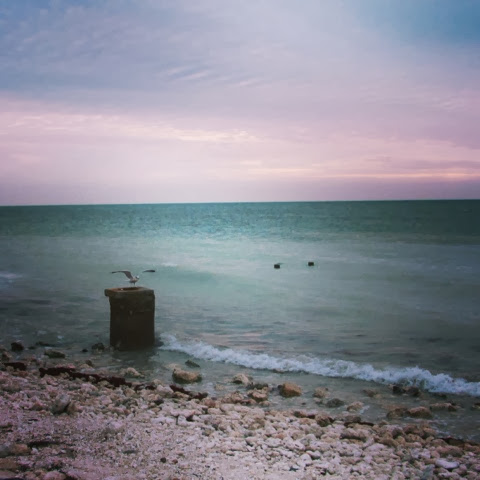 I also was able to take some really great photos and just relax. It was much needed. 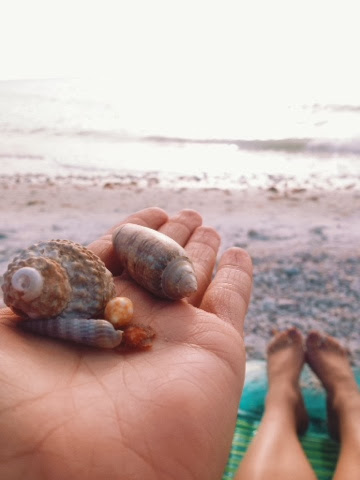 Hope you had a great holiday as well!

Posted by Angela Maria at 2:03 PM No comments: 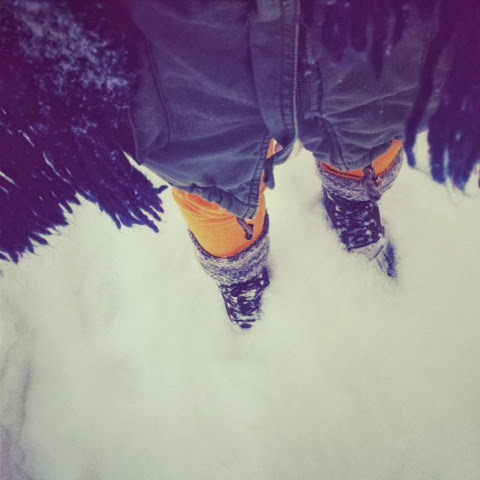 I've spent at least some of the past two winters in Maryland and there has never been this much snow... ever. I'm not complaining because I'm used to it, being from upstate New York, I was just surprised by the presences of more snow than just a "dusting."
Last week, it snowed a ton in Maryland! My classmates and I were hoping that they would cancel school, and I bet that they would have, had it not been finals week. We trudged through wind, sleet, and icy conditions to get to our exams. 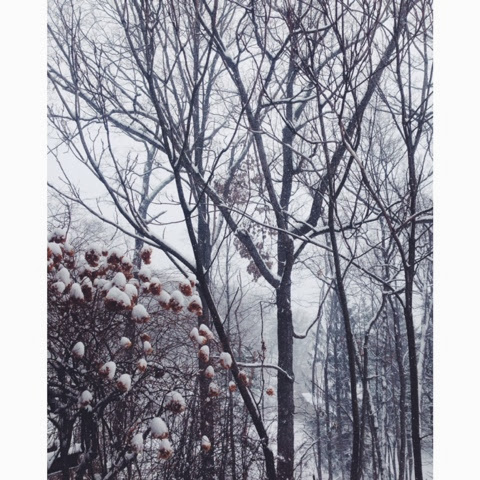 I was actually pleased by the amount of snowfall, not only because it made everything around my campus look beautiful, but because it gave me the excuse to wear my most favorite winter coat; the olive green parka that I can be seen wearing in almost every one of my photos from my study abroad trip to London.
Take a look at some of my past posts, it is an ethereal coat that was basically sent to me from God.
I bought my parka from a thrift shop during one of my first free afternoons in London. When we first got to London, it was colder than I had expected it to be. I don't quite know what drew me to it (since it smelled really smokey) but I am so glad that I bought it! I took the huge jacket to our flat and put it in the washing machine and it has been a great companion on several of my trips.
It is a longer coat and has huge pockets that can fit mittens, my phone, my camera and even a bottle of water!
After I had bought it, I noticed just how many other young female Londoners were wearing similar parkas. I was pleased to find that I fit right in with them and their styles.
The only thing that I wish I could change about it is the fur lining the hood. It is kind of an orangy color that I'm not really partial to.
This coat is kind of worn and could use some mending, but it has sentimental value, so I could never get rid of it.
I am trying to figure out a way that I would be able to change the faux fur lining on the hood, and I am also on the lookout for a similar parka that may look a bit nicer.
I definitely want the same olive color and length; these two things are the most important. I think I may like a gray-ish faux fur lining and buttons that go down the front.
Here are some that I have found online:

This parka is from ASOS and, although it is not really olive green, the darker gray goes really well with the fur on the hood. It does not look as long as my current parka, but it seems to be long enough. The price is reasonable for a good coat.

This is honestly all I could ever want in a parka. It is also from ASOS and I enjoy everything about it, except for the price.
I will continue to be on the hunt for the perfect, reasonably priced parka, but I know that, even if I do not find one this season, my trusty London parka will have my back.
Posted by Angela Maria at 1:13 PM No comments: 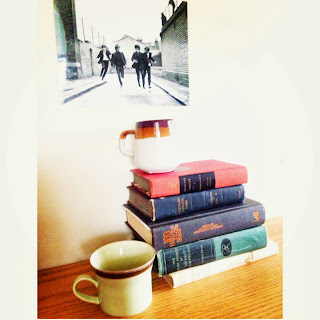 Here are my top ten tips to making it out of finals week alive:
Posted by Angela Maria at 11:51 AM No comments:

Email ThisBlogThis!Share to TwitterShare to FacebookShare to Pinterest
Labels: The College Life 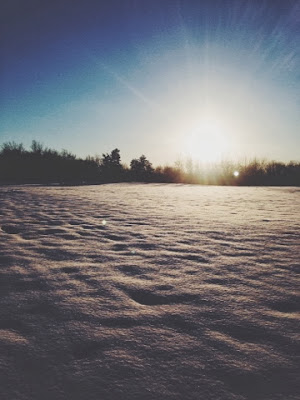 The Thanksgiving Holiday break was such a tease this year... I went home to spend the holiday with my family a week ago, and I had such a great time with them, but I was drowning in anxiety over approaching final exams and projects.
It was fantastic to have a small break, but knowing just how much work had to be completed between the time I got back to school from Thanksgiving break until the end of finals week, next Friday, was daunting.
I did not let it get the best of me though! I was unable to get some of the work that I had brought home with me done, but it was just as important for my sanity to spend some time relaxing and hanging out with family and friends. 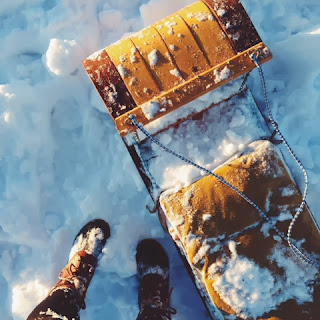 One of the highlights of my break, other than having some time to just chill, was going tobogganing with my younger cousins! The toboggan that I have can be called "vintage." My father has had it for around forty years and it is much faster than your average plastic sled. It is a work of art, made of wood with the curved front.
We flew down a steep, snowy hill and I was in charge of making sure we did not crash into any trees or the brick building at the bottom of the hill.
Normally, I do not really like the cold or the snow that much, but it was perfect for tobogganing and the sun was setting, which allowed me to take some really lovely photos. It felt like home and the winters that I have grown up with. 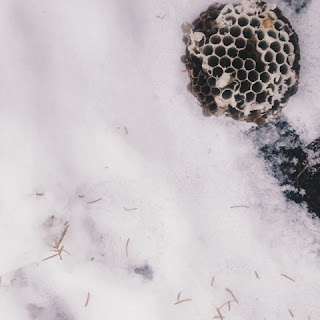 Coming back to school on Sunday night was terrifying because of how much work I had left to do for Monday. Luckily, I was able to get everything done and I am so glad to say that I survived this week! It is basically smooth sailing from here on out. I have finals and presentations to give next week, but I know that I will have ample time to prepare for all these things, so I am not as nervous or anxious about them.
I am really looking forward to finishing up this semester and being able to spend some time at home for our winter break.
Posted by Angela Maria at 10:53 PM No comments: