I recently found out that a good friend of mine who just graduated with me was in a car accident. Apparently he was driving back from a day of work at his dream job as a director at a summer camp that teaches kids about outdoor adventures, when he swerved to hit a deer and ended up in a ditch. Although he had hit his head, he walked away from the car without a scratch on his body, but later blacked out and woke up without any memory of the last three years. The last memories that he has are from February 2012, of our freshman year. 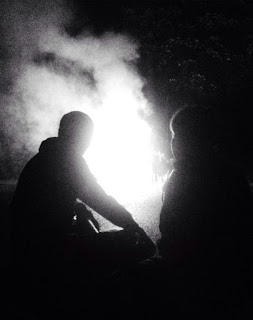 What is the first thought that comes to your mind, when you wake up in a hospital bed with a headache, and you cannot remember how you got there?

Or, what do you do when a stranger walks into your hospital room and starts talking to you like they know you well, calling you by your first name and asking you about when you think you will be able to come back to work?

When I found out about what happened, I was at work in my office at our university. I could not believe what I was hearing. I was so glad to know that my friend was alive and physically unharmed, but devastated to find out that he could not remember anything from the past three years... what about his degree, or all the outdoor skills he had learned through our university's outdoor adventures program, or his new girlfriend of one month, or the memories and relationships that he had built up since then?

These were possibly the worst three years to forget... From my experience, college was the most formative time in my life. I grew up a lot, and learned more about myself than I ever could have imagined. I cannot imagine how my life would be if I had not changed and grown since my freshman year... and right now, that is all that my good friend can remember.

The friend group that we shared really formed during the second semester of our freshman year, and most of us have stayed really good friends throughout our college experience. Some of us have transferred to schools in different states, some graduated early, and some drifted apart a little bit, but we all managed to stay close and never pass up an opportunity to get together and have a good time. I unfortunately learned that our good friend only remembers vaguely who I am, since we only really started hanging out after February of our freshman year. This was sad to hear, since we have really grown up together since freshman year.

Anyways, three of our friends were able to go to the hospital and visit our friend in recovery, and one of them said that the first thing he said as they walked into the room was "Wow, you look so old." They spent the rest of the time at the hospital with him, catching him up on his life: what he ended up majoring in, who he dated, what kind of music he likes, and what ideas he had for his future. All of this was news to him. He also needed to be caught up on current events and was also promptly given someone's netflix password.

After I got out of work, my three friends came over and we took a long trip down memory lane. We pulled up the old facebook group that we all belonged to, filled with personalized memes and inside jokes from freshman and sophomore year. Most of these jokes were dumb, and the posts that we had written seemed so juvenile, and it was sad to realize that these were the versions of us that our friend knows right now. Though we are the same people, we have grown up and matured so much in three years.

It is not clear whether or not he will regain his memory, since such a huge portion of it has been lost, but I guess that the bright side of this is that he has friends who truly care about him, and who are able to tell him about the good times that we all had together.

Though our group has gone in different directions since graduation, some onto work, others on to grad school, we are planning on having a weekend trip to the beach so our friend can get to know all of us once again. We plan on reliving some memories and talking about our times together, and also hope to make some new memories. Although I know that some moments are sure to be awkward, since our friend does not really know us all as well as we know him, he is still the same person with the same sense of humor and I am sure we will get along and grow closer once again.

This experience has really pushed me to reflect on my time in college. I am so thankful for all of the experiences that I had (both good and bad), for the people that I met, and for the growing that I did. I would just urge incoming freshmen and current undergrads to really cherish the four years that you have. The friends you make will become some of the most important people in your lives and you will learn more about relationships and life lessons than you ever dreamed you would...

And now, a quote from The Office, which hits way too close to home:
Posted by Angela Maria at 11:34 PM