6 Tips on facing your fears (from recent, firsthand experience)

I can honestly say that in my first month and a half of living in the "real world," I have faced two of my biggest fears head-on... and not by choice, mind you. No, I am not scared of living six hours away from home or starting a new job... The two fears that I have unwillingly faced recently have been: 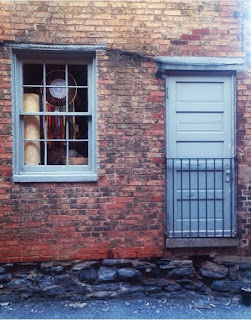 Getting behind the wheel:

I cannot explain my aversion to driving, though anybody who has ever driven with me multiple times (my best friend Emily, for example) can attest to the fact that I am particularly jumpy when I am in the car. Everything scares me. I do not know when or why driving started scaring me so much. I am not a bad driver… I passed my license exam on the first try when I was 17… I am just afraid of other people’s bad driving. I get especially anxious over driving long distances in unfamiliar areas.

Even though I successfully made it through all four years of undergrad without a car, the time came to accept the responsibility of driving regularly, after I accepted my grad assistant position at my university. Since I would no longer be living on campus, and since there is no form of public transportation around because I do not live in a big city, I would have to get to work and class on my own.

My first attempt at facing this fear was making the drive from my hometown in NY to my new apartment in MD. It was a six hour drive and I was behind the wheel the whole way, with my mother riding in the passenger’s seat. I have never driven that long before, and felt very relieved and proud of myself when we finally arrived to my apartment.

Now that I have settled in nicely with my apartment and at my job, I have gotten used to driving and it rarely fazes me anymore. I even drove my roommate to Harrisburg, PA, which is about an hour and a half away, and I drove back all by myself. I celebrated my stunning feat that evening with a solo wine and cheese night.

When a stranger calls:

Some people just get anxious about answering the phone. I have avoided answering my home telephone for years… sometimes I even let it go to voicemail when I am home alone, since the calls are rarely for me. I don’t mind answering my cellphone, since it ID’s the callers and I rarely have to talk to strangers. There is just something about the office phone that petrifies me.

It has taken me forever to figure out how my own office phone even works in the first place… When I first started at my office this summer, I totally messed up the phone protocol when asking people to hold and asking co-workers if they are available to take calls. I have also definitely accidentally hung up on people… what a nightmare.

As the graduate assistant in my university’s Communication Office, I am very close to being at the bottom of the totem pole, but luckily there are two undergraduate student workers who also work at my office. Their positions are not necessarily lower than mine, but the phone duties usually fall to them.

Last week, the unthinkable happened, and both student workers were out for a grand total of two days which mean that I was banished to the university’s “switchboard,” which is the main phone line for the whole university. I had to greet people and transfer calls and I was not happy about it. I thought I was going to have an anxiety attack, but in the end, it kind of cured my fear.

Although I definitely messed up and sent callers to the wrong department and office extensions sometimes, I eventually got the professional phone lingo and protocol down. By the end of the day, the ring of the phone did not make my heart race one bit.

Here are a few tips that I wanted to share about facing your fears:

What fears have you recently faced?
Posted by Angela Maria at 4:00 PM