Since my family and I are on a fast-paced bus tour of Central Europe, we get to see a lot of different cities and places in two weeks, but at the price of never having quite enough time in each of the places that we visit. It is a trade off, but I think it is worth it. It just means that I am going to have to visit some of these great places again in the future to see everything! 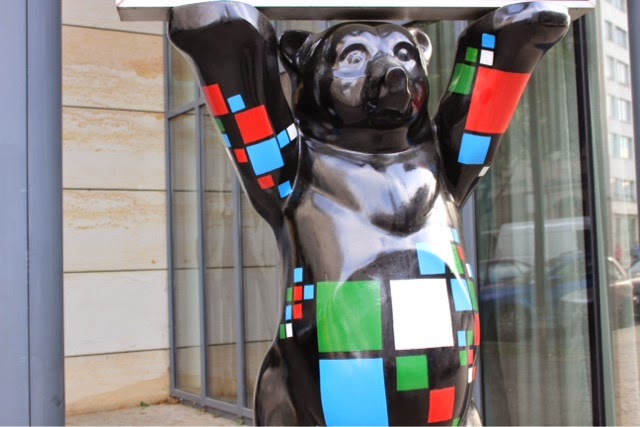 The symbol for Berlin is a little bear, so there are all these bear statues all over the city. Here is one of them which was in front of an artsy hotel.
I have found that I actually really like Berlin. There is a whole lot of history packed in one city, and it also has a lot of culture and nature, which I thought was surprising.There are parks and forests all over the city and (as I saw in Frankfurt) everyone rides their bikes. I love it. I love the pace of the city and seeing people in business clothes and helmets, riding to work along the bike routes alongside cars. If only the US could make bike-culture normal. 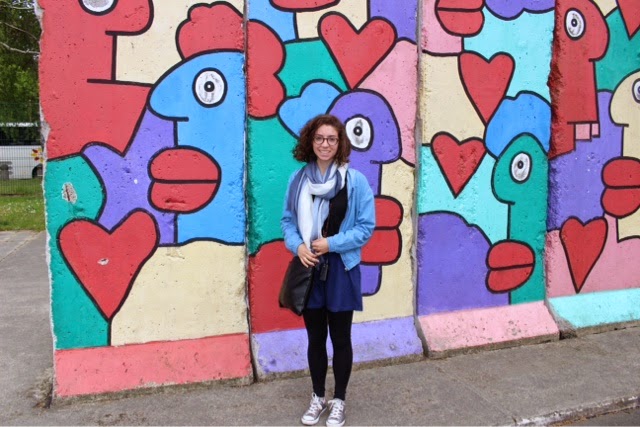 Above is a photo of me with a painted section of the Berlin Wall, found at the Allies Museum. I cannot imagine being separated from family and friends by a wall which just showed up in my home city, basically overnight. The other side of the wall faced East Berlin, and was unpainted and had bullet holes. People in East Berlin could not be anywhere near the wall, or they would be shot at.
We could see the stark contrast not only on the Wall itself, but also in the styles and histories of the different sides of Berlin. 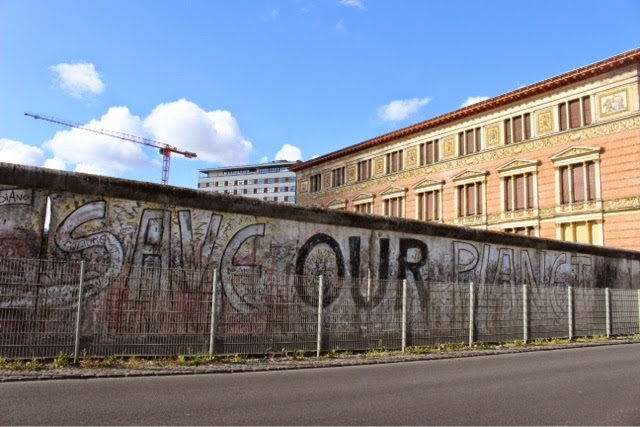 Above is another, larger section of the Wall. I had learned about the second World War in school, of course, as well as the division of Berlin afterwards, but never in such detail. The city itself just exudes history, and I have absorbed so much in my short time here. 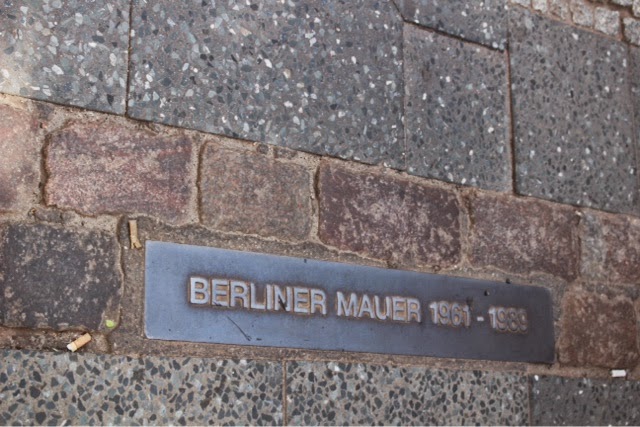 Now, not many parts of the Wall remain, but there is a cobblestone line drawn through the entire city which shows the divide. This part of the line was near the tourist spot, Checkpoint Charlie, which was where the main checkpoint along the divide was. 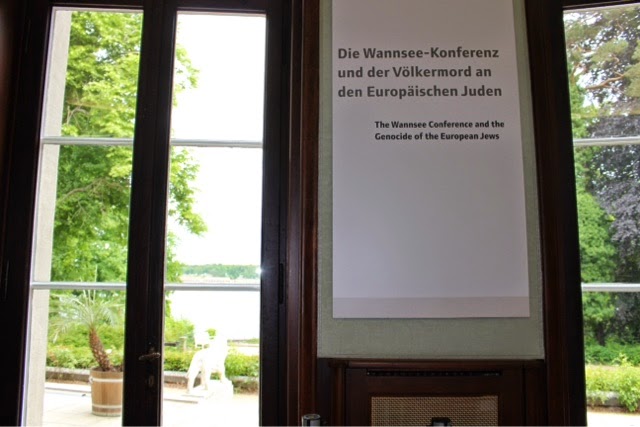 Our bus tour brought us to Wannsee, where we visited the place where the Nazis had their meeting about the "final solution." It was scary to think that they decided the fates of hundreds of thousands of people in one 90-minute meeting. 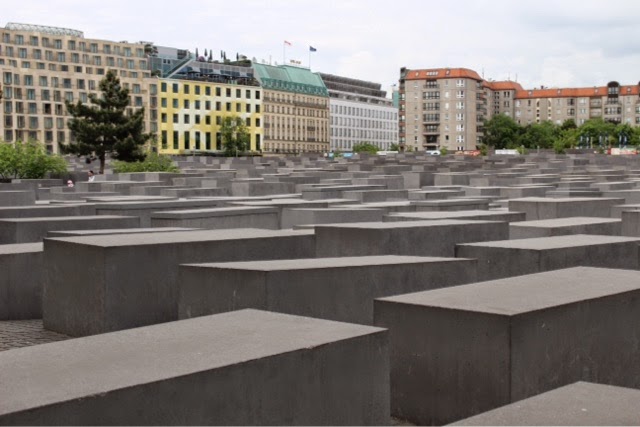 Another humbling experience was walking through the Memorial to the Murdered Jews of Europe, which can be seen above, as well as the mini Holocaust Museum which is housed beneath it. The memorial is made up of hundreds of stone blocks of varying heights, which are meant to look like coffins. They symbolize those who were killed during the Holocaust, a part of Germany's past. You can walk through the memorial, between the blocks, and sink beneath their surfaces. It becomes kind of like a maze and may make you feel a bit claustrophobic. This memorial was so powerful, and has become one of the best that I have ever seen. 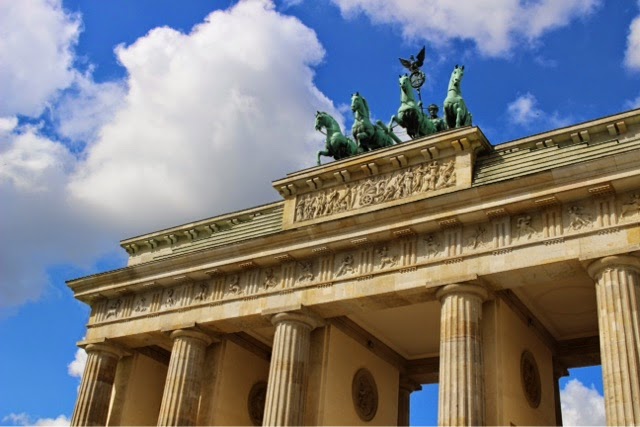 Our tour also made a stop at the Brandenburg Gate, which is a gorgeous arch in the middle of the city. It made for a great photo opportunity. 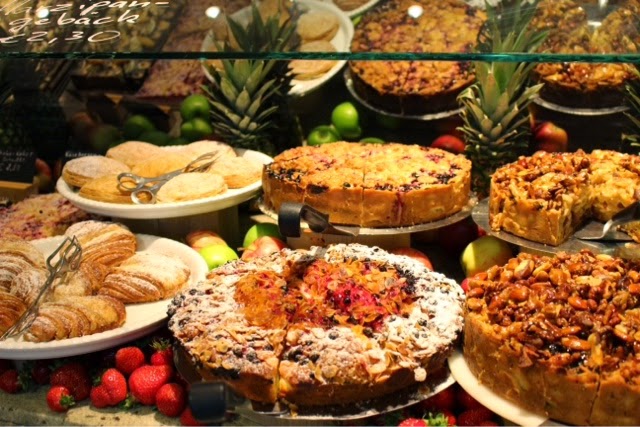 Another great part about Berlin, in addition to it's abundance of history, is the abundance of coffee shops and bakeries. Our tour guide called Berlin the coffee shop of Europe. Above is some dessert that we had with lunch. We also tried Schnitzel.
The best dessert that we had in Berlin, by far, came from Berliner Kaffeerosteri, which is a gorgeous gourmet coffeeshop and bakery. Their specialty is a blueberry cake, which I will dream about for the next few years.
Posted by Angela Maria at 3:45 PM