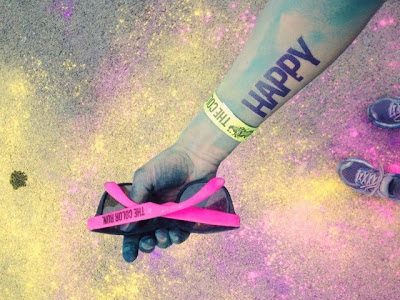 I have been wanting to write a post about the coolest 5K on earth, that I was able to partake in a few weekends ago, but I've only just found the time.
Two of my friends and I decided that we wanted to participate in the Color Run, so we signed up over the summer. I did not know what to expect, but I knew that we had to show up, dressed in white, and that we would probably come out of the race a little more colorful.
On Sunday, November 17th, race day, we got up early, grabbed some Dunkin and drove to Baltimore.
By 9 a.m., the city streets had become crowded with eager and excited people, from children to grannies, dressed in white. The earlier of the two heats of the Baltimore Color Run was to go off an hour later.
The Color Run has grown into the largest event series in the United States within just a few years. This was definitely made clear on Sunday.
We strolled about Camden Yards for a bit, trying to find where we could register. When we finally got our registration packets, we put on our temporary tattoos, t-shirts, and sweatbands and were ready to run.
The Color Run is called "the Happiest 5K" in the world, and I believe that it actually, truly is. It was a non-competitive race, so we were not timed and we jogged and even walked during some of it. 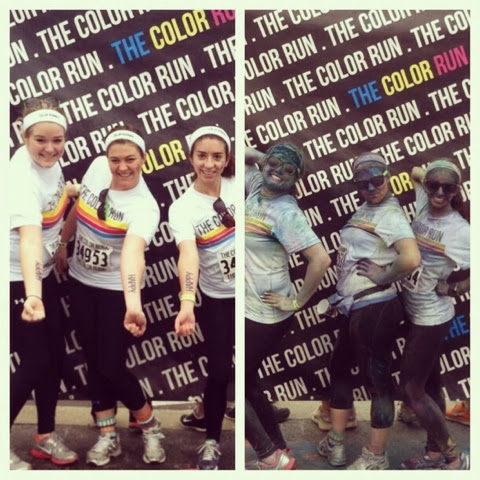 At each kilometer mark, there was a color station where volunteers would throw colored powder at us. I was so glad that we had all brought sunglasses because the powder would have undoubtedly gone into our eyes if we had not.
The powder is just colored corn starch, and we got some in our mouths during the run. It is harmless to us and to the earth, but it leaves you with a funny taste and smell.
As you can tell from the above before and after photo, we came out of the race quite colorful. This after photo was also taken post- color festival, which is where we were turned into smurfs.
After the race, we were able to grab some water and a KIND healthy grain bar, and then we made our way to the stage where we RAVED.
The DJ and other motivators were playing loud music and getting us to dance! They were throwing fannypacks and towels at us. I wasn't able to get my hands on any of them, but I did catch a few extra color packets.
When they gave the word, everyone in the crowd opened their color packets and flung the powder into the air. It was superb and suffocating all at the same time.
After we drove back to campus, we each took a long shower to try and scrub the powder out of our skin and hair. It took a while, but being able to take part in the run was an amazing and unique experience! We did not want it to end.
Posted by Angela Maria at 10:16 PM