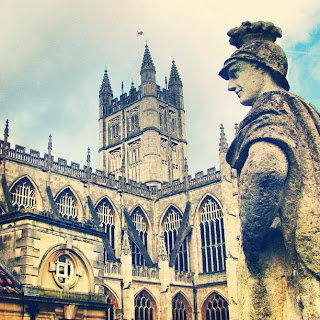 A big group of people from the consortium traveled to Bath yesterday! We had a great time exploring the town and walking around the Roman Baths. 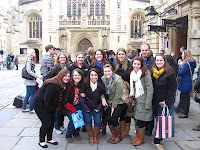 Everybody from my College went on the trip... so we just had to have a group photo in front of the Roman Baths and the Bath Abbey. After the three hour ride there from London, we had a short bus tour of the town and then had about an hour and a half to eat and Rome-d around until we had our self- guided tour of the Roman Baths in Bath. 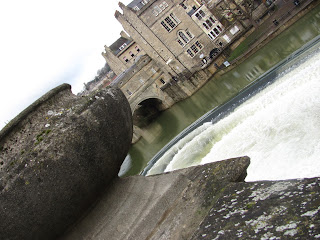 The first thing that we did when we left the bus was go to the bridge that we had passed by. If you have seen Les Miserables, this photo may look familiar. This is the part of the river where Javert commits suicide. It was filmed in Bath. The River Avon was supposed to be the Seine. Russell Crowe must not have read the "no diving" sign that was there, because he threw himself off a bridge in Pulteney Weir. The scene must have been edited because the bridge in the movie is much closer to the grooved part of the river than the bridge that is actually there. 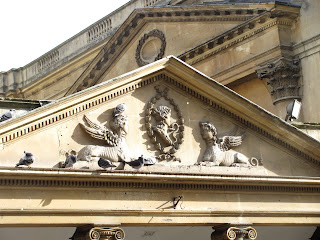 We walked around and noticed that every building is made out of the same kind of stone; it is Bath stone and it was actually mandated that any building must be built with it. The city is a variety of tones of Bath stone. 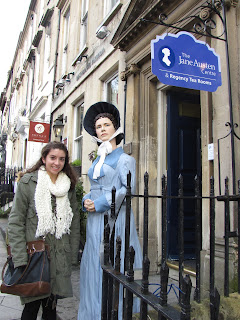 My friends and I visited the Jane Austen Centre while we had free time. We really wanted to go on the tour, because some of Austen's novels were set in Bath and she also lived there for a time. Unfortunately, the tour would have taken longer than the time that we had and we did not want to rush. We were unable to go through the tour but we were happy to have gone into the gift shop and buy some souvenirs.
Pride and Prejudice and Sense and Sensibility are two of my most favourite novels.
Before our tour of the Baths, we were extremely hungry so we grabbed some pastries from a local bakery. I could live off of Pastries in a heartbeat. I love them. I had a life- changing almond and chocolate croissant. I savoured every bite.

When at the Roman Baths, we took an audio tour that went through the museum and right through the Baths, where people came to relax and take water for their health. It was amazing to be able to walk through a place that was so ancient.
I forgot that I was in England at times because of the Roman statues and columns all around me. I enjoyed reading about the history and details of how the Baths were built and used by ancient people. 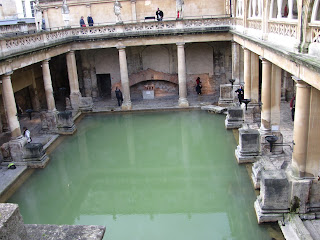 Walking along the uneven stone floor, right next to the bath was quite an opportunity. I really wanted to know how deep the water was.
We got to try some of the hot spring water that was full of minerals and was supposed to be good for you to drink... it tasted like metal and was not very pleasant to have, but it was all part of the experience.
The town of Bath was full of cute shops and little eateries. It was a perfect little day trip to have and we all had such a great time. 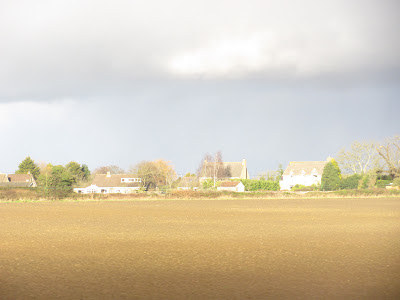 The drives to and from Bath were full of lovely English country side, which I had not been able to see yet, with only being in London so far. There was a lot of green and farmland, as well as other little towns and hedgerows.
I am so glad that we had this opportunity!