So many plays, so little time! 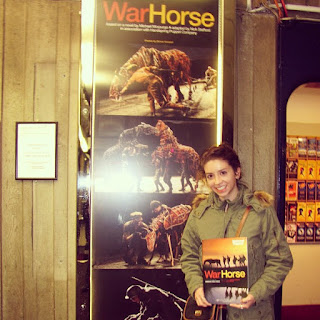 I have been lucky enough to get tickets through AIFS to several plays in and around London. Since I am in a Shakespeare class, we have had the opportunity to go to see a unique interpretation of Julius Caesar, as well as Richard III and The Winter's Tale, which was in Stratford- Upon- Avon and put on by the Royal Shakespeare Company.
I love Shakespeare, and it was amazing to see these plays acted out in such different styles. I had read and watched Julius Caesar before, but this interpretation was put on by an all female cast and was supposed to take place in a female prison. There were parts that were truly amazing, and also some that I was unsure of what to think. Richard III was a new Shakespeare play for me. While I read the play, I got confused with all the names and the different sides that there were, but the play really helped me figure out who was who. This rendition was put on by a traditional, all male cast. So, yes, there were men dressed in gowns as Queen Elizabeth and the Duchess.
The Winter's Tale has been my favorite of the Shakespearean plays that we have seen thus far. I have not finished reading the play for class yet, so I did not expect it to be as funny as it was at times. The actors and actresses were of a great quality... no wonder they are a part of the Royal Shakespeare Company. 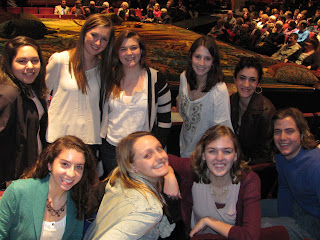 I have noticed that each of the Shakespearean plays that we have seen have ended in dance numbers that make me smile.
I bought a ticket to see War Horse, which was so amazing, that I also bought the ₤4 program! The puppets that they used for the horses took my breath away. They obviously were not real horses, but they were so realistic in their movements, that it was easy to forget about the four pairs of human legs that were showing from underneath them. I would definitely see this play again if I could. It has been my favorite/ favourite of them all.
When the play was over, the puppeteers received a standing ovation. There were three puppeteers per horse and when they walked onto the stage without the puppets, the entire audience could tell that they had worked hard because they were doused in sweat.
It was easily the best play that I have ever seen.
I will be seeing One Man, Two Guvnors, Billy Elliot, and Wicked in the next few months, through AIFS. I may also try to see Les Miserables, though I have heard that tickets are quite expensive.
Posted by Angela Maria at 6:47 PM