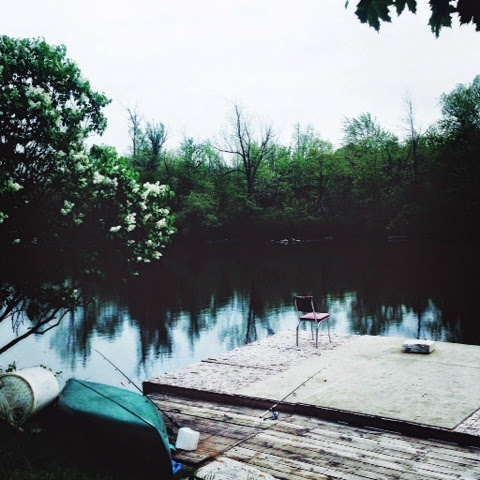 I have been done with my junior year of university for a few weeks now. I'm back in my hometown, but not for long because I will soon be embarking on a new and much needed adventure to.........
SPAIN
After a stressful semester which included the complication of a badly sprained ankle, coming home and jumping right in to working my retail job, as well as beginning research for my senior projects, and handling some major changes in my life, I'm just about ready to swim across the Atlantic Ocean, just for the change of scenery and the rush that I get from exploring new places.
I have to wait just a few weeks now, and I am just keeping my eyes on the prize. I will be visiting and touring a bunch of cities in Spain, a few places in Portugal and I am very excited to be making a daytrip to Morocco. Then, I will be able to say that I have been to Africa! After touring these places, I will be studying abroad for a month in Madrid, the capital of Spain. The summer semester will help me knock out the final few requirements for my Spanish major and I am hoping that I will gain some confidence with my Spanish skills. I have known how to speak Spanish for my entire life, and I understand basically everything that is said to me, but I have always been shy with using my Spanish with native speakers. I will have to get used to the Spanish (from Spain) accent, because I know that it is different from Latin-American Spanish, which is what I have grown up with.
In Spain, there the z sounds more like a "th" and I know that there are other colloquialisms that I will have to learn. My Spanish professor will be giving us quizzes on these, so I have to start studying and practicing them. I will be sure to pack some index cards for scholarly attempts.
But let's get back to the fun part!
My parents and I will be taking part in an abbreviated version of El Camino de Santiago, or the Way of St. James. We will be walking about one hundred kilometers (or around sixty miles) in five days. The entire pilgrimage is about six hundred kilometers and takes a few months to complete. One of the most popular routes begins in the Pyrenees Mountains in France. The trail goes all along the North of Spain to the city of Santiago, where St. James is buried. Each pilgrim's Camino ends at the Church in the center of town.
Now, normally, pilgrims bring all that they will be needing for their trips in backpacks that they carry with them, and they also stay in hostels, or refugios along the way... my parents and I will not be doing this (but maybe in the future I will go back to do el Camino in its totality).
I had begun to prepare for this trip during last semester... I was determined, dedicated to going to the gym and working out, and I was in great shape however, I sprained my ankle while bouldering, which set me back a lot. I was on crutches for a few weeks, and even a month and a half later, my ankle is still weak. I am really hoping that I will make it through the one hundred kilometers that we will be walking.
Here are some photos of me bouldering... moments before I jumped down and landed badly on my ankle... I still had a great time with friends, regardless of a busted ankle! 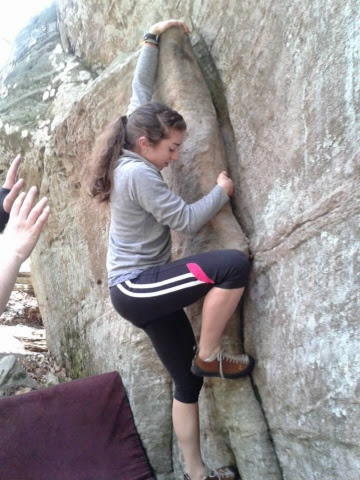 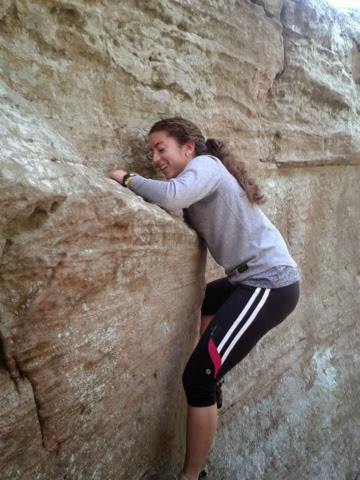 I will be updating this blog a lot more often, now that I have something to blog about! Have you ever done anything like El Camino? Do you have any tips for me?
Feel free to follow to keep up with me on my trip and for more information on my travels.
If you would like to learn more about El Camino de Santiago, click here.